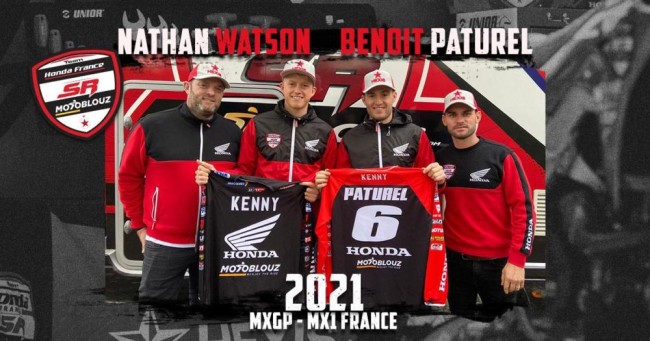 For the third year in a row team Honda France SR Motoblouz will compete next season in the MXGP World Championship, with a new line up. Joining the team for the Beach Races Nathan Watson will be back in his favourite series, and will have Benoit Paturel as team mate.

A few weeks after introducing his line up for the Beach Races (Nathan Watson, Lars Van Berkel and Richard Fura, with Matheo Miot as support rider), Josse Sallefranque is pleased to confirm that the SR team will also enter in 2021 the French and World Motocross Championships. He offers Nathan Watson a great opportunity to be back in Motocross, after being forced to move successfully to Enduro and Beach Races, and gives another chance to Benoit Paturel who has been unlucky since his move in the MXGP class.

Watson, third at the 2019 MX of Nations with Team Great Britain, had a taste of MXGP during the last Belgian round of the series, where he scores an eleventh position in one moto. Winner of the 2016 MX of Nations with Team France, Paturel scores several top eight results this season despite missing several rounds due to an injury mid season. Both riders will be trained by Christophe Meyer, and will enter the French Elite (first round on March 14th in Castelnau de Levis) and the MXGP Championship (first round on April 3rd in Oman).

Nathan Watson: “I’m really excited to get back into MXGP! I’ve been wanting to get back motocross racing for the last few years and now I have the opportunity, I want to make the most of it!”

Benoit Paturel: “I’m delighted to have this opportunity, and want to thanks Josse who trust me and offers me a good ride; I’m happy to continue riding a Honda as I have such a great feeling with this bike. It will be nice to work again with a French team, to be back in the French series and I can’t wait to start working with Christophe Meyer.”

Josse Sallefranque: “I’m very happy to have a new and young team, after two years alongside Jeremy who brings us his experience. We will defend our French MX1 title, and in the MXGP we expect to be again the best private team with top twelve results. With our trainer Christophe Meyer, we will offer all our experience and knowledge to Nathan and Benoit; we know their potential, now it’s up to the team to help them to get the results we all expect.”