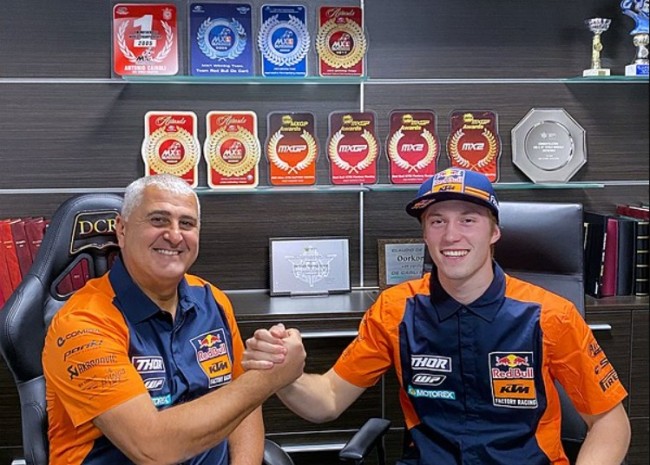 Guadagnini is the 2020 EMX250 European Championship runner-up after owning nine motos in his first season on a 250cc four-stroke machine. He adds the silver medal to the gold he won in 2019 as the FIM World and EMX125 #1 for what was his first major step onto the international stage.

Guadagnini will slot into Claudio de Carli’s side of the Red Bull KTM Factory Racing set-up where he will join the training program around Tony Cairoli and Jorge Prado and their Roman base. The Grand Prix rookie can count MX2 World Champion Tom Vialle and Rene Hofer as teammates in MX2 next year.

Red Bull KTM will continue to field Cairoli, Jeffrey Herlings and Prado on the KTM 450 SX-Fs in the MXGP division.

Mattia Guadagnini: “For me this is a dream come true to join the KTM family, especially the De Carli team as I grew up watching Tony’s races. I always said ‘one day I want to be there also and fight in the world championship’ so the day has come and I’m so happy. I like how they work as a big family, spending lots of time together. Also having Tony and Jorge as direct teammates will be awesome. I can learn a lot and I think I have all I need to work on my goals for the future!”

Claudio De Carli: “Mattia is one of the most interesting young riders in international motocross, he has already reached important milestones and he must continue in his growth to fight with the best riders in the world championship. We are happy to have him in our team and, as always, we will try to give him the best from a technical and training point of view. He gives me the impression of a boy with solid principles and great motivation and I want him to face this first year with us by working with his teammates, without pressure and with the aim of improving in every aspect in his first full season of MX2.”