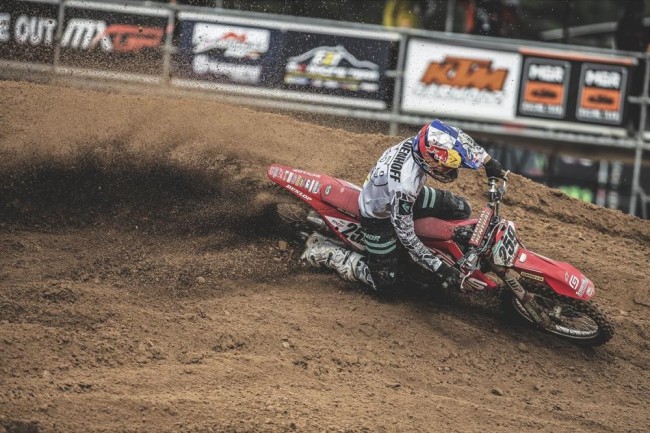 Despite a heavy fall and subsequent second moto DNF for round three MXGP winner Glenn Coldenhoff, GASGAS Factory Racing saw Ivo Monticelli and Simon Langenfelder both claim superb top-10 overall results at the MXGP of Riga. Monticelli charged to the race two holeshot in the MXGP class and placed seventh overall, with Langenfelder delivering a standout 9-12 result to earn ninth in the MX2 class’ classification. Last weekend’s MXGP overall winner Glenn Coldenhoff placed seventh in the opening MXGP moto before a sizable crash early in race two forced the Dutchman out of proceedings.

Standing Construct GASGAS Factory Racing’s Ivo Monticelli re-ignited his MXGP World Championship campaign at the MXGP of Riga. A strong start resulted in an enjoyable opening moto for the Italian on his second visit to the Kegums circuit, round four of the MXGP World Championship. Emerging from the first corner in seventh place, the MC 450F rider quickly progressed to fifth position, showcasing his capability and speed. Ivo then settled into a comfortable rhythm at the halfway stage of the race and in securing an 11th place finish collected solid MXGP points.

Using the power of the MC 450F machinery to his full advantage, Ivo Monticelli claimed the race two MXGP holeshot in Latvia. With a minor change to his bike’s suspension between races, the Italian was hungry for more championship points and another strong result. Going on to withstand pressure from current MXGP World Champion Tim Gajser for many laps, the Italian turned his season around with a confidence inspiring seventh place finish and claimed seventh overall.

It was a frustrating MXGP of Riga for Glenn Coldenhoff. Arriving with his confidence high after claiming overall victory at last weekend’s MXGP, he was lucky to avoid a first turn pile up in the opening moto, which claimed a number of riders. A frantic, race-long battle for fifth place ensued with no fewer than six riders fighting for position. With Glenn right in the midst of the action, the Standing Construct GASGAS Factory Racing rider completed a smart race to claim seventh at the finish.

Looking to rebound strongly in race two, an unfortunate crash ruled Coldenhoff out of the moto. Charging through the field on the opening laps, he collided with another rider. Able to re-join the race but in pain and unable to ride to his full potential, he opted to withdraw from the race after a handful of laps.

Luckily no fractures for @glenncoldenhoff 🙏

Simon Langenfelder’s rapid MC 250F powered the young German to a great start in the opening MX2 moto at the MXGP of Riga. Rounding the first turn in fifth place, Langenfelder dropped back one position to sixth but remained cool and composed while racing with established MX2 stars for the entire moto. Losing a few spots in the closing laps, the 16-year-old gave his all for the full race, which ended with and a ninth-place finish for Simon.

Race two saw Langenfelder really establish himself as a consistent MX2 point scorer. Finding his feet in only the fourth GP of his young career, a solid 12th place finish secured ninth overall on the day, propelling him up the MX2 World Championship standings to 17th.

Glenn Coldenhoff: “Sometimes you win, sometimes you lose! This is motocross and it’s not always easy. Of course, after last weekend’s result it’s been a disappointing end to today’s GP, but my first race was ok. Finishing seventh after a big battle for much of the race was good, but not where I wanted to be. The second race didn’t begin so well, which was my fault. But I felt good right from the first lap, fit and strong and ready to battle. I was passing riders quickly but maybe I got a little too impatient and crashed into someone. I went down pretty hard and winded myself. I managed to re-join the race but after a few laps I was in more and more pain, so I had to pull out as I knew something wasn’t right. I’ll get checked out and I’ll be doing everything I can to be ready for round five on Sunday.”

Ivo Monticelli: “Finally! A good day’s racing in MXGP for me this season. It’s been a struggle to start the season, getting injured and then not having much time on the bike before the season restarted. After qualifying, the team made some adjustments to my bikes suspension as the track was really rough, with square edge bumps everywhere. I had a good start in race one but couldn’t quite find my rhythm early in the race. At the halfway stage I did and then rode decent laps to finish 11th so this was pretty good. We made another adjustment to my bike’s suspension before race two and my team did a great job. I pulled the holeshot and felt confident, so I was able to push all through the race. Sure, I finished seventh, but this is a huge step in the right direction for me after a few bad GPs so I’m hoping I can continue like this. We have the perfect bike set up now, so I’m really looking forward to Sunday.”

Simon Langenfelder: “It was the first GP ever on a Wednesday, so this was something new and exciting. I had a decent qualifying time and I felt great on my GASGAS, so I was looking forward to the races. I had made a great start in the first race, fourth place so that made the race a lot easier for me. I slipped back to sixth place where I stayed for a lot of the race so that was good, running up front in MX2. I slipped back to ninth towards the end but I was really happy with my result. In race two I had another good start, but the front guys were going really fast and the track was gnarly, so I rode my own race and finished 12th. I had two solid races, good points and ninth overall is a great day for me and the team and we look forward to racing again on Sunday.”

Both Standing Construct GASGAS Factory Racing and the DIGA Procross GASGAS Factory Juniors look forward to returning to the Kegums circuit for round five of the FIM Motocross World Championship on August 16.