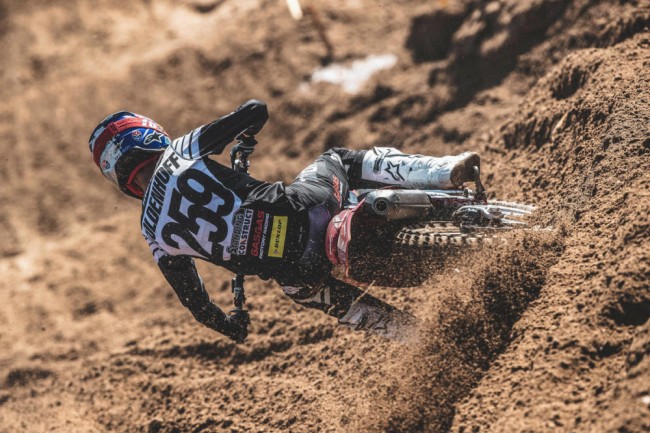 Overcoming severe discomfort following his crash and subsequent second moto DNF at round four of the 2020 MXGP World Championship held just four days ago, Standing Construct GASGAS Factory Racing’s Glenn Coldenhoff has raced to a strong sixth place overall finish at the MXGP of Kegums following two gutsy performances aboard his MC 450F. Teammate Ivo Monticelli recorded a consistent set of results, securing 11th in both motos after claiming the holeshot in race one. In the MX2 class, Simon Langenfelder continues to progress with the youngster earning 19th overall after two hot and humid motos at the Kegums circuit.

Glenn Coldenhoff returned to form at the MXGP of Kegums, claiming better than expected results despite the pain of severely bruised ribs. The Dutchman rode a smart opening race, opting to take his time during the first half of the moto before making a mid-race charge towards the front of the field. A seventh-place finish was a promising opening moto result for the overall round three winner.

Race two saw more of the same from Coldenhoff. Needing to carefully select the smoothest lines around the bumpy Kegums circuit to minimize his discomfort, it was a largely ‘quiet’ moto with a similar late-race progression resulting in Glenn claiming a sixth-place finish, earning a strong sixth-place overall result for his efforts.

Ivo Monticelli blitzed to his second consecutive MXGP class holeshot in the opening moto of the day aboard his powerful MC 450F. Clearly confident, the Italian enjoyed racing in fourth position well into the second half of the race. While still not 100% recovered from his early season shoulder injury, Ivo claimed a hard-fought 11th place result.

Race two saw Monticelli shuffled backwards in the opening-lap chaos before finding his rhythm at the halfway stages of the moto. Harnessing his usual aggressive riding style, the 25-year-old rode consistent laps and moved forwards in the latter stages of the race to earn a second 11th place finish.

Simon Langenfelder clearly had the taste for success after his impressive showing at the previous round of the MX2 World Championship. With the potent MC 250F beneath him, the young German rounded the opening corner of the first moto in a strong fourth position. Gaining vital experience with every lap, he battled throughout the 30-minute-plus-two-lap race to ultimately cross the finish line in 13th position.

The second moto wasn’t quite so fruitful for Simon. Very nearly claiming the holeshot on his DIGA Procross GASGAS, the 16-year-old gave the race everything he had but fell back through the pack and finished just outside a points-paying position. In claiming 19th overall, Langenfelder advances to 16th in the MX2 World Championship standings.

Glenn Coldenhoff: “Today was always going to be a challenge with my injury. Fortunately, nothing was broken in my crash on Wednesday, just a hematoma around my ribs which is really painful, especially on a track like this. I had to ride different lines than I would normally to avoid the biggest bumps. It’s not ideal to race like this and I was expecting to be top 15, so to go 7-6 and be sixth overall is something that I’m happy with. In race one I started slowly. I didn’t want to fall down so I was patient and then as the field spread out, I could push and make passes and finished in seventh place, so this was a good ride. Race two was sixth, a little better and it was really just two results that are good for the championship and much better than expected. I’ll now work on further recovery over the next few weeks.”

Ivo Monticelli: “Today was quite a good day with more points on the board and consistent races. I’m a little disappointed with race one but I have to be happy because of the long road from my injury. I’m still recovering and fighting to be 100% again, but it was a shame to run up front for so long in race one after pulling another holeshot. But I have the speed so before the next round I will focus on my training as my GASGAS is set up perfectly, I just need to catch up on my conditioning. I’ll now return to Belgium and continue to train and be ready for the next GP.”

Simon Langenfelder: “Today was good and bad really. In race one I had a great start and managed to run in sixth place for a long time. I really wanted to finish in this position so I pushed and pushed for as long as I could. Unfortunately, I pushed too hard and got a little tired, and slipped back to 13th place. I was disappointed but 13th is still a good result. I know that my GASGAS will always get me good starts so I can keep learning and improving my race craft now. It’s only my fifth GP and we’ve had three in one week here in Latvia and I’ve learned so much. I’m healthy and looking forward to the next GP.”