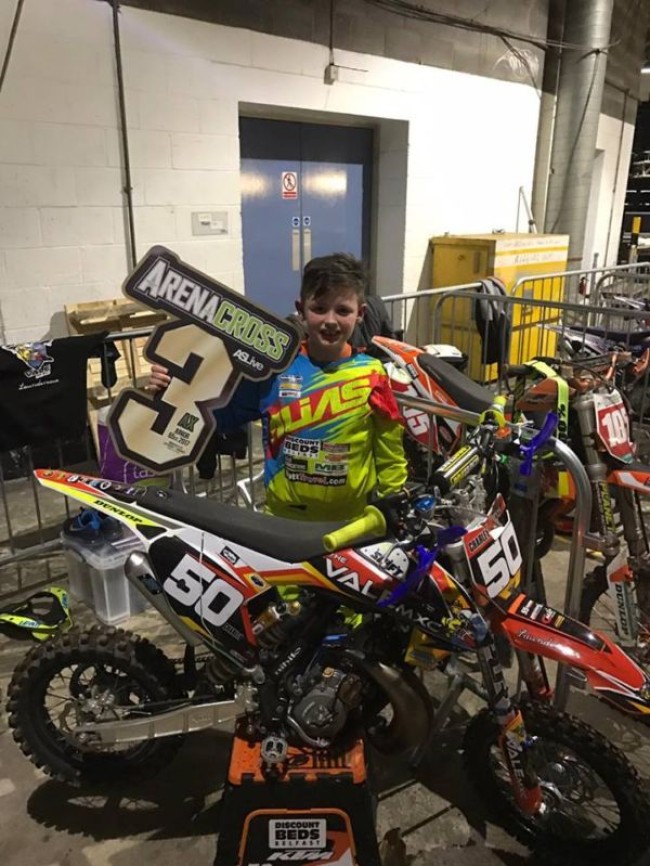 Jason Meara won’t be the only local rider taking part at the British Arenacross in Belfast this weekend as Charley Irwin from Ballyclare will also be competing. Irwin who is only nine years old will be racing the 65cc class, “I super excited about taking part in Arenacross at Belfast in front of my home crowd, friends and family.”

Irwin currently sits sixth in the 65cc championship but hasn’t had the best of luck in 2017. “’Last weekend in Birmingham the track was great and I had a good race during the day and was looking forward to the evening race at the show but my bike broke at the start gate. I was gutted to miss that race completely, but I will make up for it this weekend over the four races”.

You might remember Irwin from the Belfast AX last year as he also competed the event in 2016 and just missed out on the podium, hopefully this year he will be able to get himself on the podium and improve on his sixth position in the championship,

“I entered the Belfast round of AX last year as a wild card and got a fourth place finish on the Friday night. I’m stronger and more comfortable on the bike this year so hopefully I can get a podium and give everyone something to cheer about”.

Hopefully Meara and Irwin put on good performances in their classes to give the Belfast crowd something to get behind this weekend!