Charles Lefrancois on his Manchester victory! 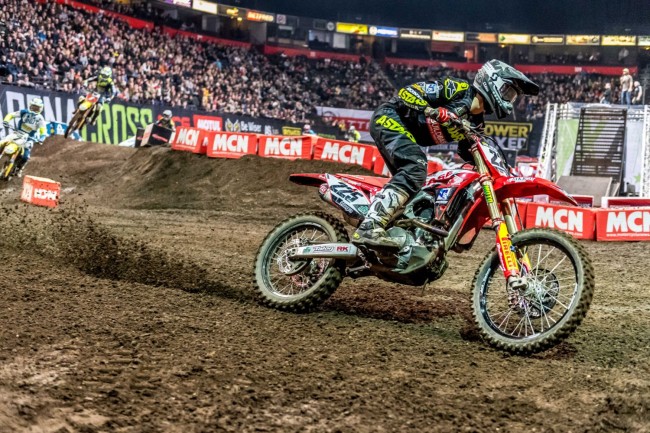 Buildbase Honda’s Charles Lefrancois raced to a commanding victory at the opening round of the 2018 Arenacross Tour at Manchester Arena on Saturday night.

Throughout practice and qualification the 27-year-old Frenchman didn’t drop out of the top two on his 2018 CRF450R before running 2-1 in his heat races and picking up an extra three championship points by topping the hot lap competition.

When the gate dropped on the Main Event he grabbed the holeshot and then controlled the race from the front, leading every lap and taking the chequered flag with a two-second advantage over the second-placed rider.

“It’s a very good start for me and I’m really happy,” he said. “All night has been good for me with great starts and I have a good feeling with the Buildbase Honda so I am very happy for the team.

“I took the holeshot in the Main Event and then concentrated on my lines because the track was difficult with many ruts – the dirt was very soft but I like that because it gave me many lines to choose from.”

Charles’ team-mate Fabien Izoird had a tougher time. The 2014 AX champion ran 3-4 in his heats and started the Main Event well but a puncture in the final few laps forced him to drop a place to fifth in the closing stages.

“It’s not been the best start for me and I’m a little bit disappointed,” said the Frenchman. “It was difficult in qualifying and hard to make a fast lap but I got a good start in the Main Event and was fourth until I got a flat tyre. Fifth is not the best but it’s okay for the first round.

“The track was very soft but I’m sure it will be better for the next round in Newcastle so I’m looking to improve my position.”

Team boss Dave Thorpe was delighted with the result.

“It’s been a fantastic night for the team,” he said. “Charles didn’t put a foot wrong – I’m absolutely chuffed to bits for him. We didn’t really know him too well before he came over to test but straight away we realised he was a quality rider.

“He’s ridden amazingly all night. I’m so pleased for him and the whole team because they’ve all worked very hard. Arenacross takes a lot of effort to get right – I’m sure we won’t have the highs all the way along but tonight has been great.

“Unfortunately, Fabien got a puncture with three laps to go which probably cost him a podium but it’s been a solid opening night and I’m confident he has what it takes to run at the front. He knows how to win this championship.”

With one round down Buildbase Honda leads both the Pro Championship and the Pro Team Championship and now heads into round two of the series next Saturday at the Metro Radio Arena in Newcastle.