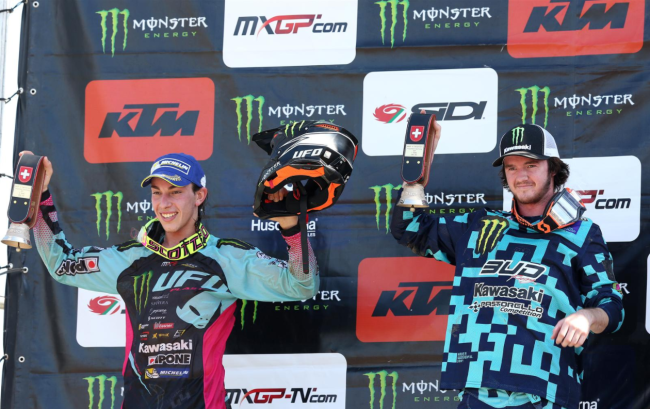 The Swiss round of the FIM European EMX250 Motocross Championship was a resounding success for Kawasaki with Tristan Charboneau taking the race victory and Morgan Lesiardo regaining the series lead.

Charboneau, an American who has been racing this year in Europe for Bud Racing Monster Energy Kawasaki swept to the fastest time in qualification at the track on the outskirts of Frauenfeld-Gachnang and led the opening moto from start to finish for a clear-cut victory before also taking the holeshot in race two to lead for six of the thirteen laps before settling for the third place which secured him his second consecutive overall victory in the series. He is now eighth in the championship standings.

Lesiardo, racing for the Monster Energy Kawasaki MX2 Racing Team, was second to Charboneau in qualification and recovered superbly from an early error whilst running second to fight his way back from fourteenth to fifth in the opening moto before sweeping to an emphatic victory in race two to secure second place over the weekend and take a twenty-six-point lead to the final rounds of the championship next month.

Charboneau’s Bud Racing teammate Marshal Weltin narrowly failed to complete a Kawasaki sweep of the podium. Fourth in race one, the American missed the podium on the tie-break after finishing seventh in race two and has now advanced to fifth in the series. Indeed, the first moto saw complete domination by the green Kawasaki machines as, assisted by Spaniard Ruben Fernandez of the Dutch F&H team and Czech Filip Neugebauer of Team Pfeil, KX250F machines secured the first five places.

Tristan Charboneau: «It was a good weekend, pretty easy actually, though that second moto was probably the hardest. Those guys had a lot of drive to get their best finishes of the season, but I gotta give it to Bud Racing and my mechanic for supporting me through the hard times and the good times, giving me this chance to race the European championship. »

Morgan Lesiardo: « It was a great weekend, just a shame that on Saturday I made a mistake during the first lap of the race when I was second. I rejoined the race fourteenth after this crash and was able to recover to fifth; that was not so bad but without that mistake I could have also won this race. In the second moto I was third at the start and moved forward to second and then to first; the track was bumpy but I had a great feeling with the bike and the track. I’m very happy of course to get the red plate back, now we have time to prepare for the final round in France mi- September. It’s great to see that the hard work is paying off; we never stop working with the team and we’ll continue like that.”