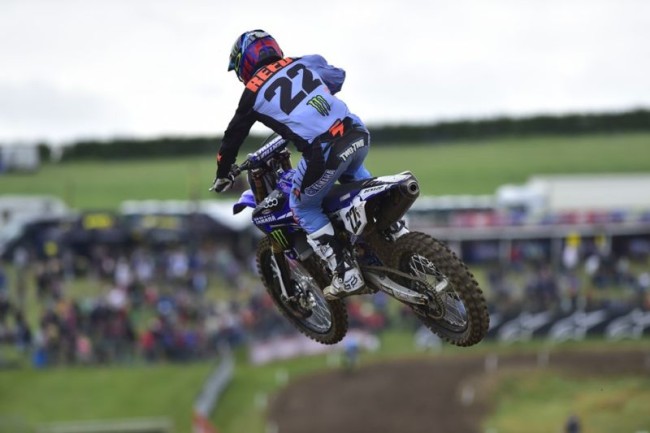 Kemea Yamaha Official MX Team rider Valentin Guillod finished fifth overall on Sunday at the MXGP of Great Britain in Matterley Basin, racing to his best single moto finish of 2016 and moving further up in the World Championship rankings in the Swiss rider’s first season in the premier class.

Monster Energy Yamaha Factory Racing Official MXGP Team rider Jeremy Van Horebeek was nearly as successful, despite changing weather conditions on a weekend that saw sunshine, clouds and rain all in one day, and deeply influenced the final results as track conditions changed mid-race. Teammate Romain Febvre did not start on Sunday after a heavy crash on Saturday in qualifying led to the 2015 FIM World Champion to withdraw from competition and return home early to concentrate on his recovery.

Wild Card Monster Energy Yamaha Racing rider Chad Reed raced his first European Grand Prix in more than 15 years on Sunday, finishing 14th in race one and 16th in race two. The AMA Supercross Champion was challenged by the speed and duration of outdoor motocross, but quickly found his footing in Matterley Basin to finish 13th overall in front of thousands of British racing fans.

Guillod finished third in the first moto on Sunday, riding at the head of the race after an excellent start on the hard pack championship motocross circuit. An early duel with Slovenian rider Tim Gajser put Guillod in second, and a slight mistake near the end allowed Italian rider Antonio Cairoli to pass ahead of the finish. But the third-place for Guillod for marks his highest placing of his 2016 rookie MXGP season.

Rain began to fall at the beginning of race two, and Guillod’s goggles cracked when a rock hit them during the start, limiting his vision and leading to a small crash. Once upright, Guillod removed the eye protection and continued the race without goggles in the mud, rain and dirt, eventually finishing seventh, two points off the final podium.

Van Horebeek made another good start in race one, finishing sixth on the slippery and wide track with lap times just under two minutes. In the second race the Belgian rider crashed early after a poor start as light rain made the circuit even slicker, but with excellent YZ450FM speed and top technique Van Horebeek chased back from 27th to eighth.

By virtue of his fifth overall at Matterley Basin, Guillod moves up to seventh in the World Championship rankings, 30 points clear of Shaun Simpson of Great Britain. Van Horebeek remains in sixth overall, nearly 80 points ahead of Guillod.

Febvre missed points at MXGP of UK, but stays second overall in the 2016 rankings with a slim three-point lead over Italian rider Antonio Cairoli.

“I tried to clean my goggles, but the roll-off system was broken by a stone in the start, and it was hard to see. 10 seconds before I could remove them I crashed. Without goggles it’s really complicated to race, but I managed to come back to 7th.”

“The first race was awesome, really good. But I’m disappointed to miss the podium by two points. It’s not about my riding, it’s just bad luck.”

“It was difficult to pass in the first race, but the team did a great job for the second moto and I was confident that I could do better. The start was complicated because of the rain, and I crashed, so it was a chase back to eighth. Maybe not the best result, but the riding was really good, and I had a really good pace.”

“It was not easy with the rain today, and the track was getting really slippery. I’m disappointed with the results, but the riding is going really well.”

“I think my physical fitness is totally fine, but the muscle memory for 35 minutes of pounding, especially from this track, is lacking. The riding, the feeling on the bike and the pace was fine, but the grind in two days of motocross is a lot different than what we do in one day in Supercross.”

“Hopefully this will shock the body and make next week a bit easier. But honestly the pace doesn’t seem too gnarly, and my feeling on the bike is the best I have had outdoors in a long time.”