Chad Reed on his last A1 – never easy to walk away 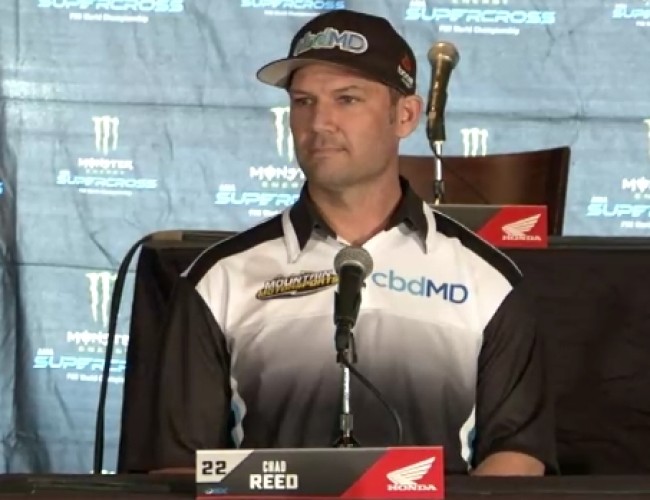 A very emotional Chad Reed got to say goodbye to the supercross world at the press conference ahead of his last ever A1 and supercross season.

The 36 year old said: “I feel complete, finally. This motorcycle thing has been my life, my world (voice breaking). It’s never easy to walk away from something that you love. The time is right, last year I had the opportunity to do some car racing, and just like riding a bike, it stole my heart.

“I look around the room and I’ve worked with a lot of people in here, I’ve had some amazing moments. Ellie is here this weekend, she was here from the beginning.

On his favourite win his career, Reed said it was A1 in 2003. “I grew up as a little kid, a huge fan of Jeremy and this was Jeremy’s house (Anaheim). My first win in the big bike class in 2003, it was the easiest race of my life and yup don’t picture something you e dreamed of for so long so easy, every one after that harder. I’ll never forget 2005 at Daytona, (beating Carmichael) it’s been good time, to think of the memories with Ricky and James, then the two Ryan’s and now the new group.

“It’s meant the world to me. Ever since I was 3 years old motorcycles have been my life, the last year it’s been coming. Each opening ceremonies I get to compete in this year, I’ll be thankful.

“Here’s to my last season I appreciate each and everyone of you in here that have been kind to me over the years.”