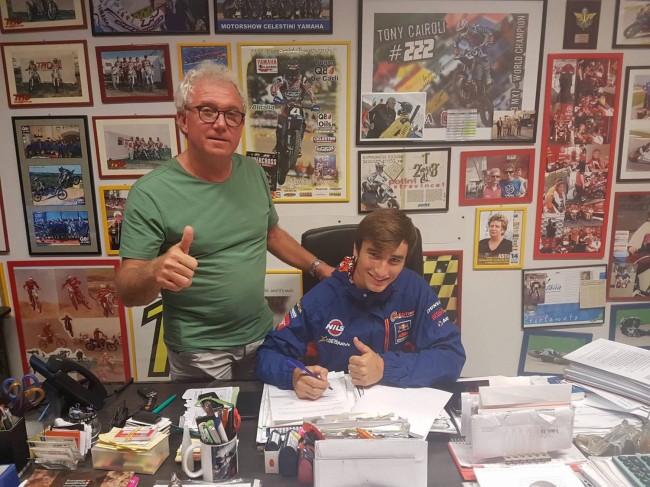 The Celestini KTM team are pleased to announce their rider line up for the 2018 season. The team are pleased to be expanding next year as not only will they continue to support the EMX125 series with two riders but they will also run a rider in the EMX250 series.

Having a good campaign in the EMX125 series this year was Matteo Puccinelli as he finished tenth in the series and it was his first year in the class so he could have a bright future. The Italian has inked a deal with the Celestini KTM team which means he will stay on orange but he will move up to the 250cc and compete in the EMX250 series.

Matteo Puccinelli: “I chose this team because in my opinion it’s the right choice to grow and do well with the new bike. I have already jumped on the 250cc for a while and I feel good. For this new adventure I expect to grow with the new bike and get some good results in both Italy and Europe. I want to thank the Celestini team for the opportunity, my family who always follow me and my sponsors who continue to support me.

Staying with the team for another year will be Emilio Scuteri, the Italian improved a lot during the course of the season and finished eleventh in the EMX125 series. With another winter behind him he will be hoping to be right at the front in 2018 with potential podiums and even race wins not out of the question.

Emilio Scuteri: “I’m happy to stay with the Celestini team for another year because they don’t want to lose me, they treat me very well and I’m fine where I am. Next year my goals are to win the Italian championship, internationals and making the podium in the European series! I can’t wait to start to prove my potential!”

Max Ratschiller: “I am very happy that this is my first time in a 100% supported team. I’m even more pleased to be with the Celestini team, I’ve already had a test on the new 125 KTM. Coming from Yamaha, I came out very happy getting a great feeling right away with the KTM. I will racing the Junior Italian Championship and for the first time I will race in the European Championship as well as the Italian Internationals in a high level team.

My goal is to do well, the best we can make the most out of it is to work and try to be ready at the right time. I want to thank the Celestini Racing Team, my family and Diego Saiani who until today have helped me”.