Catching up with Reece Boal 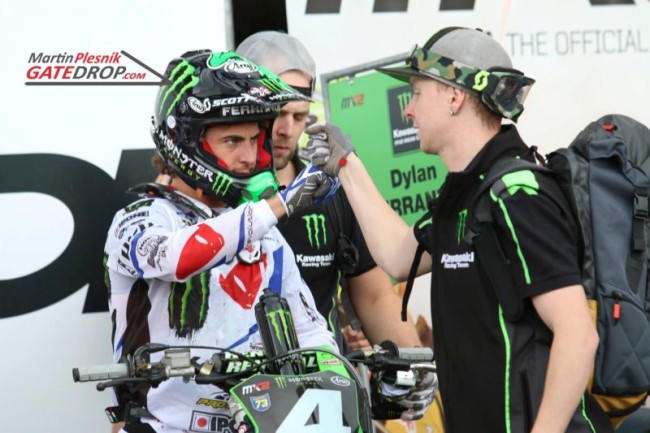 In 2013 Reece Boal landed himself a job in the British motocross paddock working with the MBO Yamaha team and mechanic for Kristian Whatley. His first year went very well as together with Whatley they won a lot that year including the Maxxis British Championship and the Red Bull Pro National championship. Reece stayed with Kristian for the 2014 season as the two had a good thing going together.

For the 2015 season Reece switched teams, another British team as he went to the STR (Steve Turner Racing) KTM team where he worked with Adam Sterry for a year. As Sterry was riding the EMX championship it meant that Reece got to go abroad and got to see the GP paddock regularly, this would eventually open up a new opportunity. Reece’s rider, Adam Sterry was a strong championship contender in the EMX series, winning some rounds but he eventually ended up third in the standings. He also finished third in the British motocross championship, a solid year!

However, at the end of the 2015 season, Reece had an important decision to make. The Factory Monster KRT MX2 team wanted Reece to be part of their team and do the team’s race engines. However, it was a tough decision as 2016 was going to be Sterry’s rookie year in the MX2 World Championship. After careful consideration, Reece decided that the move was simply too good to turn down and he is now present at all the World Championship races working for one of the best teams in the paddock, who would have thought that a few years ago?

It’s great to see someone from our country involved in the GP’s, we decided to catch up with him to talk about life in the GP paddock.

Gatedrop: You got the phone call before the season from the Monster KRT MX2 team, it must have felt great to get the opportunity to work for such a good team in the paddock..

Reece Boal: Yes, this was a big opportunity that I could not let pass me, I rate this team as one of the best in the paddock. When you start working in the motocross circles it’s your dream to work for a factory team and the top riders of the sport.

Reece Boal: Yes, it is never easy leaving any team but I can tell you making that phone call was one of the hardest ones I’ve had to make. While we are on this subject I would like to thank him for that opportunity. Of course doing this meant I wouldn’t be working for Adam, which again was not a good thing either, for me Adam had also became a good friend as well as my rider. His entire family are lovely people and were very good to me all year so I didn’t know how things were going be this year with everyone but thankfully everything is fine and we speak at most of the GP’s.

Gatedrop: You have a different role within the KRT than STR, can you explain your role and the differences?

Reece Boal: When I was at STR I was just the race mechanic and that meant I only worked on the frames from week to week which believe me is still lot of work and then obviously I worked with Adam at the weekends. Now at KRT I am the engine guy, when I first came to the team I was only supposed to do the training engines and race engines for hunter who is our EMX rider. But I now do the race engines for Dylan (Ferrandis) and Petar (Petrov). For me this is a great opportunity. Then during the races at the weekend I only check the engines on the Saturday night after the qualifying for the Sunday (race day).

Reece Boal: The hours vary every week but believe me it’s a lot more than a nine to five job. There are many times before the start of the season where there were nights without any sleep to drive and go testing with Dylan in France. But once you have everything right you can get into the routine and can work ahead. Being away from home for me isn’t too bad but when you do have a bad day all you want to do is just be at home for a few hours away from everything.

Gatedrop: You have worked with Whatley, Sterry and Frossard etc. How are Ferrandis and Petrov to work with compared to with other riders?

Reece Boal: Dylan is Dylan – you never know what you’re going to get. He is a really good lad, he knows what he wants and that is to win which you have to respect. Thankfully for me he has been quite easy and had very few complaints. Petar (Petrov) is easy, he would ride a scooter if he had to. For me Adam (Sterry) is easy to work for, he’s the easiest rider I have had. Kristian (Whatley) was again not bad to work for, he is fussy about certain things, especially about the suspension but again I had a good time, we are still good friends and still talk a good bit.

Gatedrop: Young Aussie, Hunter Lawrence is new to the MXGP paddock, unfortunately he got injured but how is he getting on adapting to life in Holland?

Reece Boal: Yeah I think it took him a while to get used to it, especially the weather. But the riding side of things came quick and he got fast quickly. I get on with him really well, he is a good guy – well, the entire family are good people, the type of people you want around you and in the team.

Gatedrop: Disaster struck for Dylan in Thailand, as someone who works for the team what goes through your head seeing the rider getting hurt?

Reece Boal: This was not the one, it’s never good seeing a rider getting injured but when he had a good chance at taking the title it definately makes it even harder. I saw the crash and I knew straight away he wasn’t good. But unfortunately that’s racing and that is going to happen sometimes.

Gatedrop: Before his injury, Dylan had a fantastic start to the season, seeing him run with Herlings, it must have felt like all the hours in the work shop were worth all the effort?

Reece Boal: oh yeah! It was fantastic but I knew by watching him in pre-season he was going to challenge.  When I said this to other people outside the paddock they laughed at me and thought no way.

Gatedrop: Herlings and Ferrandis are big rivals, what’s your thoughts on it all?

Reece Boal: Yeah, obviously I’m behind Dylan 100% but I can’t deny Herlings talent. But his excuse book is quite big, when someone can take a race to him he can never just say they beat him and leave it at that, there is always something wrong.

Gatedrop: Can you confirm if you will stay with the team for the 2017 season? If so, you must be excited for it, with Herlings moving up you could play a part in a world championship title!

Reece Boal: Yes, I will be staying with the team next year. Well, the goal is to win the championship every year. But with Herlings moving into MXGP it blows it wide open and I think we have a very good chance of winning next year. But as you know, there are a lot of good riders going to be there to beat which will not be easy.