Catching up with Jago Geerts 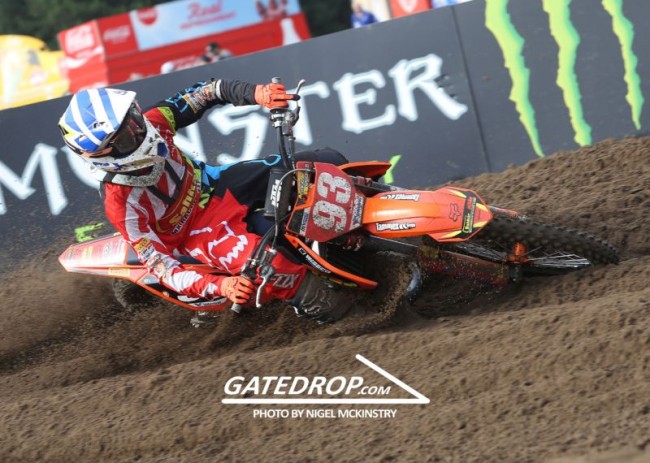 The GP of Lommel turned out to be pretty special for Jago Geerts. He was able to take both the moto wins to clinch the EMX125 title in style. A great weekend for the Belgian to take the championship as it was at his home GP, I am sure there is no better feeling than clinching a title in front of your friends and home supporters.

Jago came into this season as heavy favourite for the title but didn’t get it all his own way as French rival, Stephen Rubini was also strong. However, unfortunately the French rider got injured and had to miss Lommel and will also miss Switzerland.

However, there is no doubt that Geerts deserves this title. He is extremely talented the future looks incredibly bright. Belgium could have a future world champion in their hands.

We sat down with Jago after clinching the EMX125 championship in Lommel to reflect on his season.

Gatedrop: Jago, how does it feel to be EMX125 champion?

Jago Geerts: Yeah, it feels really good.  I was EMX85 champion in 2014 and I got that winning feeling again. I am happy I could win the title at my home race, it is a little bit special.

Gatedrop:  Winning in your home crowd is definitely better than in Switzerland, how good was the support this weekend?

Jago Geerts: Yeah winning it here is much better than in Switzerland. It was a really good weekend, I got two wins and the European championship so that is very good for me.

Jago Geerts: Yeah, I was a little bit surprised maybe. But, he is also fast so I knew just to ride my own pace, he crashed and then I could win. In the second race I rode a couple of laps fast and after that I just rode my own pace and won by like thirty-seconds I think.

Gatedrop: When Haarup was pressuring you in the first moto was that you riding at 100% or just trying to control the small gap?

Jago Geerts: Yeah, I didn’t go at 100% because then maybe I make more mistakes, I just rode my own pace and it was enough to take the win.

Gatedrop: In the second moto you won by nearly thirty-seconds and that was you controlling the gap.. You could have gone quicker if needed!

Jago Geerts: Yeah maybe. The first fifteen minutes I rode at 100% and then just my own pace so it was good.

Gatedrop: Now you have clinched the title, the pressure is off a little and after Switzerland you can focus on the 250, are you looking forward to that?

Jago Geerts:  Yeah, first I need to ride the World Championship in Russia and then I will go on the 250. I am happy that I can make a change again.

Gatedrop: I guess your goal for Russia is to win the World Championship?

Jago Geerts:  Of course. I want to win there but anything can happen as it’s just one race.

Jago Geerts:  I will just stay in Belgium at my home.  Maybe I will go to a week in France or something to ride some hard pack on the 250.

Gatedrop:  We have saw how good Prado is in the EMX250 class, does that make you excited for next year?

Jago Geerts: Yeah, I am always excited for the next season.  We will see how it goes but I hope to do really good in the EMX250 class so we will see.