Catching up with Cailum Meara 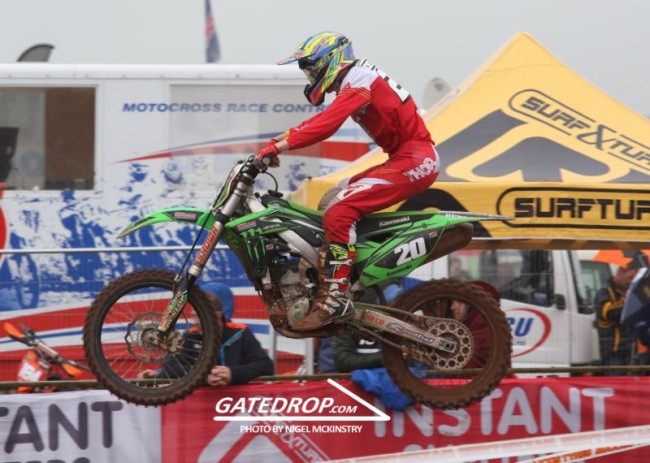 In the Irish motocross scene the Meara Brother’s are starting to take over! John Meara is riding the best in his career this year on his 450 Kawasaki and is looking good in taking the Ulster and Irish Championship races. He should also get considered for the Irish Des Nations team selection, it would be nice to see him race a few races outside Ireland before the end of the season to prove he can mix it with tougher competition.

In the 250 class, Jason Meara is having a good year on his Motul Watt KTM and could also pick up both the title’s, he has some work to do in the Ulster championship.

The 2016 season welcomed another Meara to the adult paddock in Ireland. It was younger brother, Cailum Meara turn for some adult racing. He was racing the Semi-expect championship. The format change for the 2016 season meant that he was always racing with the big guns and in the same class as his brother’s, definitely a good way to improve your speed!

Unfortunately, at the MXY2 championship at Desertmartin, Cailum crashed heavily in the second moto and his season is now over. However, we decided to sit down with him to get an update on his injury and how the season went for him before his season ending injury.

Gatedrop: Cailum, can you talk me through the extent of your injury?

Cailum Meara: Yeah, to be honest my injury is a lot worse than what I first thought it was going to be. The top of the bone in my leg has ripped off and went through my knee, this has caused my ACL to rip and also my MCL to damage.  The bone in my knee has also been shattered. I’ve had an operation now already and the progress is outstandingly good so I’m pleased with how it’s coming on.
Gatedrop: This was your first full year in the Ulster/Irish Championship, were you happy with how things were going before your injury?

Cailum Meara: Yeah this was my first full year in these championships and it was very frustrating to start with but I never got myself worried, I knew that I have some very good speed but I have to admit myself I can go a bit crazy on the bike and just go for whatever position that’s in front of me.  However, as the season progressed I started to settle my head a bit and I was starting to put in some very good results. I was starting to feel good on the bike, everything started to fall into place and when everything is working together that’s when the results start coming easy. So I can’t really complain about my season I think everything happens for a reason and I’m already looking forward to next year.
Gatedrop: This year they changed the format meaning you ride with the Experts, what’s your thoughts on the format compared to last year?

Cailum Meara: I actually really liked the format in the Ulster Championship, it showed me what I have to do if I ever want to beat the top guys in the 250 class so I really enjoyed that format. The Irish championship was completely different because it is never going to be fair for a 250 to race against a 450. I’m not saying a 250 rider wouldn’t beat a 450 rider but it gives the guy on the wee bike a big disadvantage from when the gate drops. But I always like a challenge and it is only ever going to make me a better rider in the long term so I can’t really complain.
Gatedrop: How disappointing was it to get hurt at the MXY2 round, one of your biggest races of the year? Where you happy with how the weekend was going for you before the crash or where you looking more?

Cailum Meara: To be honest it was absolutely devastating getting hurt at the MXY2 at Desertmartin. For some reason that track never agrees with me. I had a chance to prove at Desertmartin that everything was finally starting to come together but instead everyone is thinking just another race for that guy to get injured so to say the least I was absolutely gutted. I wasn’t to happy of how the weekend was going becuase again surprise surprise, I had a big crash in race one as well so I was going into race two pretty banged up but I got a decent start, I felt really strong and I was starting to hit every line perfect. I had just made the pass into fifth and caught a kicker on the tabletop and it was probably one of the nastiest crashes of my life. I knew instantly something was wrong and once again another good result threw away becuase of a crash. I’m never totally happy unless I’m winning and even at that your always able to improve your riding but I was gonna settle for a top five in that race but unfortunately Desertmartin ended another season for me once again.
Gatedrop: Is it good having John and Jason to go riding with as it can help your speed?

Cailum Meara: Yeah, John especially helps so much with my riding. It’s good to have John helping becuase when he first went into the adults even up to a few years back he was pretty crazy on the bike and just went for it but now he’s settled down and matured a lot and I believe at the moment not one other rider in this country is better than him so it’s really nice to have him by my side and helping with my riding at the races and also whenever we’re at the practice track. Jason is very different, becuase his riding style is so strange, he reminds me of Stefan Everts a bit becuase he very rarely sits down and he helps quite a bit to but even growing up me and Jason never had as close as bond as what me and John had. But to finish it up when both them have everything going right they are two of the best riders in this country so I’ll listen to anything they have to say to me becuase it is only going to make me faster.
Gatedrop: Also, you can all help each other when training to push each other?

Cailum Meara: Yeah, well me and John actually train together with Eddie Curran at Pro-performance fitness. This is the first year me and John have been on quite a strict training session every time we go to the gym and it has obviously paid off. It’s good because whatever I see John do in the gym I always try and beat it and a lot of the time it never happens but it’s good for me to push myself to the limit every time. Jason’s quite weird with his training, again previous injuries don’t let him train to his full potential, he can’t run 100% but once again he’s always up for a challenge as well, he wouldn’t be what you would call really fit cardio wise but on the bike I would say he is one of the fittest men in the paddock when it comes to riding the bike.

Gatedrop: When do you think you will be back on the bike?

Cailum Meara:  At the minute I am not 100% when I am going to be back on a bike, I have to get another operation in a couple of weeks time and after that I’ll know a lot more because I will be able to start training and building myself up slowly. With this injury it is not one that you want to rush back with because of how serious a knee injury it is, so I’m not 100% sure.
Gatedrop: You rode the EMX150 championship a few years ago, you must have learnt a lot from competing in that series? Would you recommend it to other kids in this country?

Cailum Meara: Yeah I rode the EMX150 championship in 2014. The experience I gained from that was mind blowing, it was nice to have the opportunity to do that and it made it a lot easier because every round except one I had Jim McCauley with me who had spent a full season previous to that year with Natalie Kane so he knew what to expect and that helped calm me down a lot going into every weekend. Also, having Natalie at the races was very helpful because her experience and riding in the GP’s is absolutely brilliant so it helped me so much. At the Czech Republic it was one of my best rounds, for some unknown reason I ride better when John is with me so it was good to also share that experience with John who had never helped a rider in the GP paddock. I should have had a podium that weekend but once again I threw it away stupidly but there’s no point regretting it now. Definately, 100% I would reccomend this to other kids in this country, it will help every single aspect of your riding and also helps you mature a lot on and off the track.

Gatedrop: Now that you have competed for half a season in the Ulster/Irish Championships are you excited for next year now you know what to expect?

Cailum Meara: Yeah, I am very excited for next year actually, I will be more prepared with riding a 250 for longer and I’m willing to put in a very hard winter training with Eddie and John so I can’t wait for next year.

Cailum Meara: My plans for the 2017 season are still very unknown to myself, I just have to play my injury week by week and I never know how quick it’s going to heal so I can’t start planning it just yet. One thing I know is I’ll be on the start line in March and I can’t wait already.

Cailum Meara: Yeah I’d like to give a big thanks to Malcolm Rathmell Sport, Airoh helmets, FIST gloves, Gaerne boots, Jim McCauley, Eddie Curran, Pro-Performance Fitness, Peter McCauley and most importantly my Mum and Dad becuase they never get enough thanks and enough praise. Only for them John, Jason and myself would never have got to where we are today so I can’t thank them enough. I’d also like to give a big thanks to Sean Devlin as he helped me so much throughout the year with my riding and also he was the one that made it possible for me to ride the MXY2 at desertmartin. A big thanks to his dad as he helped me get to the MXY2 race as well, I owe a lot also to Jason McCauley because of the hours that man spent working at a practice track just so me, John and Jason could ride anytime we could was unbelievable so a big thanks to him.

I would like to take this opportunity to say a big get well soon to Wayne Garret who had a crash a couple of weeks ago. Best wishes to him and Sarah on a successful recovery.