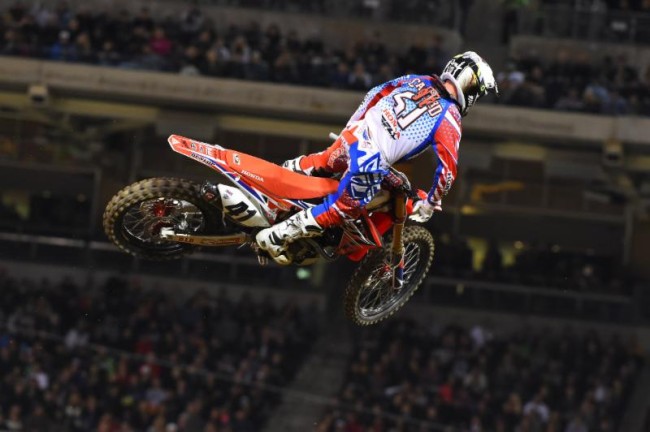 SAN DIEGO (February 7, 2015) – Monster Energy AMA Supercross, an FIM World Championship, made its debut inside Petco Park on Saturday in front of a sold out crowd of 42,017 for the sixth race of the 2015 season. On a night in which the sport honored the men and women of the armed forces with the Military Appreciation Race, Team Honda HRC’s Trey Canard raced to his second 450SX Class win in three races. In the Western Regional 250SX Class, Yamalube/Star Racing Yamaha’s Cooper Webb raced to his fourth win in the first six races of the season, extending his lead in the championship.

RCH Soaring Eagle/Jimmy John’s Factory Suzuki’s Ken Roczen gained the early advantage in the 450SX Class Main Event by claiming the SupercrossLive.com Holeshot Award ahead of Canard and BTO Sports KTM’s Andrew Short. Roczen sprinted to open a gap on the field, but Canard methodically started to close the deficit. Behind them, Red Bull KTM’s Ryan Dungey moved his way forward from a fifth-place start while GEICO Honda’s Eli Tomac and Discount Tire Racing/TwoTwo Motorsports Chad Reed made contact looking to keep pace with Dungey, leaving Tomac on the ground and outside the top 10.

On Lap 2 Dungey passed Monster Energy Kawasaki’s Davi Millsaps to move into podium position in third, then on the following lap the battle for the lead began. Canard and Roczen traded the lead a couple of times before Canard made the pass stick and pulled away slightly. The distance between the leaders stayed the same until they encountered lappers on Lap 10, allowing Roczen to get within a few bike lengths. On Lap 14, Roczen took advantage of the lappers to get on Canard’s rear fender, but the Honda rider responded. Just three laps later, Canard made a mistake that allowed Roczen to get alongside him, but again Canard fended off the pressure. Lappers ultimately separated the two riders again, allowing Canard to take the win.

“It’s been a long road but I’m just so grateful to be in this position [winning races] again,” said Canard, who earned his fifth career win. “I opened a gap and Kenny [Roczen] closed it right back in. He kept me on my toes the whole time.”

Roczen’s runner-up finish was his first podium result since he won in Anaheim, California, on January 17, two races ago.

“That was a very fun race, I just made too many mistakes,” said Roczen. “It was a good battle [with Canard]. I wish I would have picked up the pace sooner, but it’s good to be back on the box. It was a good night tonight and we’ll keep charging.”

Dungey, who entered the night as the points leader, finished third. He has five straight podium results and has finished inside the top three in all but one race.

“I felt good in the Main Event,” said Dungey. “I was hoping I’d be able to close in on the leaders, but those lappers were tough. We gave it our all and we’re happy with that. We’ll keep working and get ready for next week.”

Dungey maintained his lead in the championship and now sits nine points ahead of Roczen. Canard is third, 18 points back.

The Western Regional 250SX Class Main Event began with Rockstar Energy Husqvarna Factory Racing’s Zach Osborne capturing his third SupercrossLive.com Holeshot Award of the season in front of Webb, GEICO Honda’s Malcolm Stewart and Monster Energy/Pro Circuit/Kawasaki’s Tyler Bowers. Bowers made two quick passes on the opening lap while Webb was able to secure third after Stewart crashed coming out of a rhythm section. That same lap, Bowers made a run on Osborne for the lead, bringing Webb with him before the field crossed the line to complete the lap.

Bowers then opened a comfortable margin on Webb that extended into multiple seconds. However, just past the halfway point the distance between the two riders decreased dramatically, not only allowing Webb to close in on the lead, but also Troy Lee Designs/Lucas Oil/Red Bull/KTM’s Shane McElrath, who ran third after starting fourth. On Lap 9 Webb was able to make the pass on Bowers, who then fell to third a short time later, leaving the battle for the win between Webb and McElrath.

Once out front Webb rode consistent laps and took the checkered flag by a comfortable margin. McElrath earned the best finish of his career and his first podium result in second, while Bowers held on for third.

Earlier in the day during practice, Webb crashed hard and was forced to sit out the final session of the afternoon with an injured shoulder. He acknowledged on the podium that he almost chose to forego the remainder of the competition.

“I wasn’t going to race tonight,” explained Webb. “My crash was gnarly and I’m just thankful to walk away from it. I knew tonight was going to be a fight. I told myself I can hurt as much as I want tomorrow, but there’s no better feeling than winning.”