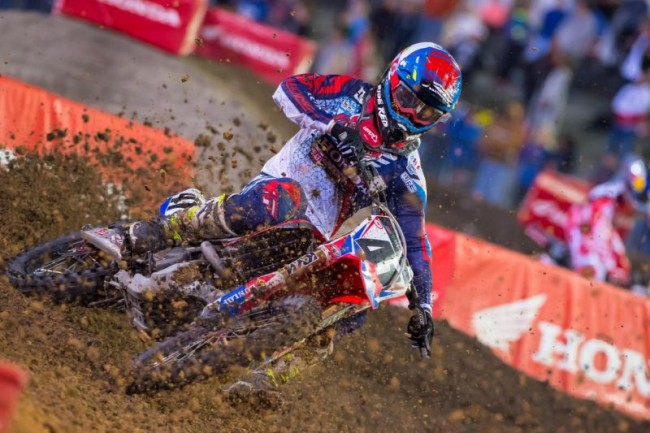 Although expectations were higher for Team Honda HRC at the Daytona Supercross by Honda, the squad was pleased with Trey Canard’s solid sixth-place finish and Cole Seely’s ability to rebound from a first-lap crash to complete the race in 10th.

Canard put himself in a good position at the start of the 20-lap main event, launching his CRF450R to a decent start and working his way to seventh by the completion of the opening lap. While running fifth at the halfway mark, Canard had a close call in the whoops, causing him to relinquish one position, which is where he would finish. It was a tough night for Seely, who tangled with a group of riders on the first lap and rejoined the race second-to-last. An impressive come-from-behind performance carried him to 10th by the checkered flag.

NOTES
•On Friday, Team Honda HRC and GEICO Honda riders participated in the pre-event press day, where they spoke with local media and were given the opportunity to try out a section of the track ahead of Saturday’s race. ”Even though they don’t let us ride very long here, it’s still beneficial to be able to preview a part of the track and kind of check out the layout and dirt prior to Saturday,” Canard explained.
•Team Honda HRC provided special access to a group of promotional winners for Daytona International Speedway, organizing a rig tour and opportunity to meet Canard and Seely prior to the race. The riders signed autographs and took photos with the fans before getting geared up for the night program.
•During the daytime qualifying practice sessions, Canard’s 1:05.589 lap, which was logged in the second session, was fifth-quickest, while teammate Seely clocked a 1:06.396 for 11th. Bogle secured seventh with a 1:06.018 lap.
•Once again, all three factory Honda riders were slotted in 450SX heat 2. Canard was able to score a transfer spot directly into the main event via a third-place finish, but Seely and Bogle weren’t as lucky and were forced into the semis, in which they each finished third.
•Next weekend, the Honda Red Riders head north of the border to Toronto, Canada, for round 9 of the AMA Supercross Series.

THE FOCUS: Honda and Daytona—a Quarter-Century Together

Once again, the Daytona track was lined with red Honda signage, as this marked the 25th season that Honda has been the title sponsor of the Daytona Supercross by Honda. “Daytona International Speedway shares in our commitment to make this the best race on the Supercross calendar,” Bob Gurga, Vice President of the Motorcycle Division at American Honda, said when a multi-year deal was signed last year. “We look forward to many more years of great racing at the Daytona Supercross By Honda.”

Honda has a big presence for the entire Daytona Bike Week, with a tent in the new Midway area. The line of Honda motorcycles is on display (fans can try out the NC700X’s automatic Dual Clutch Transmission on a portable dynamometer), and a collection of vintage Honda factory motocross, road race and flat track bikes is displayed as well.

Honda’s Bike Week racing isn’t limited to the Daytona Supercross by Honda; on Sunday following the race, Bollinger rode his CRF250R to the XC2 victory at the Wild Boar GNCC in Palatka (Bach was fourth in XC1), and Texter is slated to race at the Daytona Flat Track this Thursday and Friday.

Today was better, but I still didn’t finish where I would’ve liked to. All in all though, I think it went pretty good and I’m happy to finish inside the top 10 and be leaving healthy, considering the season I’ve been having. I really think I just raced better today overall. I felt good in the main event was able to regroup after almost going down in the whoops, to still finish strong. I wasn’t a huge fan of the track, and I don’t think many guys were; it was just too tight and there wasn’t a whole lot of room to make passes. I can’t complain too much because we all had to race the same course.

It was a rough day for us, all around. I was struggling in practice and transferred through the semi, so I had a horrible gate pick. During the main event I was involved in a first-lap pileup that banged up my bike and me a little and left me pretty much dead last. I was able to charge from 21st to 10th by the end of the race, which was good but definitely a challenge since this track wasn’t great for passing. I’m really motivated to get back home and put in the work for next week and am thankful for my team and everyone behind me.

It was a tough day for us all in all, but I’m happy Trey was able to pull it together and finish up sixth for the night. He had pretty decent starts in his heat race and main event, which was good, then was riding pretty solid. Cole struggled most of the day and ended up getting tangled up with [Mike] Alessi and some other riders on the first lap of the main event, leaving him basically last. I think he showed a lot of heart to charge through the pack and finish where he did. It obviously wasn’t the finish that we wanted but both guys tried really hard and I can’t take anything away from them.

Tonight was good and definitely a step in the right direction. Sixth at Daytona isn’t that bad. I think the big positive for Trey tonight was he was able to adapt to the race as it progressed. Halfway through the race, he started doing things that he saw other guys doing and he picked up on it, which hasn’t happened up until now. He had a pretty close call in the whoops and was able to calm his nerves and get back into the race without it frustrating him. I’m happy with that, I think he’s happy with that and it’s definitely something we can build on.”

Tonight was pretty bad—I think even maybe the worst all year. I guess it’s frustrating for Cole more than myself, but two 10th places in a row is not exactly what we’re looking for. We struggled all day and I’m not sure why, then had unfortunate luck in the main, but that’s what happens when you get stuck in the back: you go down. The positive is he was riding really well to make his way back up that far, but it’s still not what we want.