Canard and Seely frustated in Atlanta 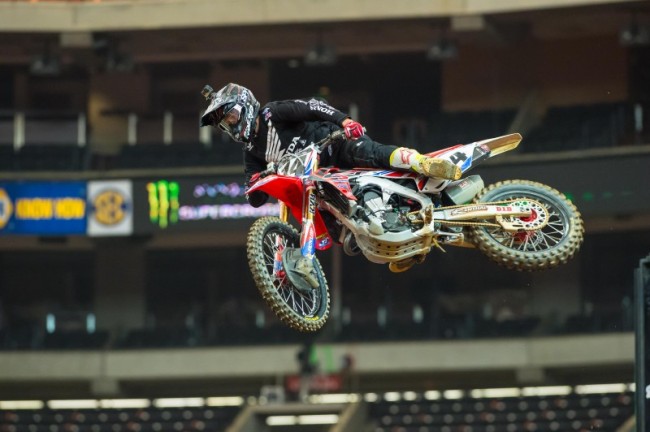 Round eight of the AMA Supercross series proved a challenge for Team Honda HRC, as both Cole Seely and Trey Canard had multiple mishaps during the main event that left them fighting in the pack. Seely got a good jump off the line but came together with another rider before the first turn, shuffling him to the middle of the running order. On lap eight, while trying to pass for fifth, Seely and Jason Anderson hit, sending them both down and costing multiple positions. By the final lap of the 20-lap race, Seely had worked his way back up to seventh, when another encounter with Anderson sent him to the ground again two turns before the finish. He remounted his CRF450R and crossed the finish line in 10th.

After a poor start, Canard put his head down and was working his way through the pack before going down on lap eight and falling back to 20th. During the crash, his bike’s front brake rotor was bent, which affected his riding for the remainder of the race. Canard crossed the line in 16th place.

NOTES
•The evening before the race, Team Honda HRC’s Trey Canard and Cole Seely, along with GEICO Honda riders Justin Bogle, RJ Hampshire and Malcolm Stewart, visited Douglasville, Georgia’s Freewheeling Honda to hang out with fans and sign autographs.
•The Atlanta Supercross marked the third time this season that Team Honda HRC has hosted a family through the Pediatric Brain Tumor Foundation and Ride for Kids. Brendan, a young survivor, joined the team for dinner before spending time with Canard and receiving the rider’s signed jersey from practice.
•During the daytime qualifying sessions, Canard notched the fourth-quickest lap time at 45.610 seconds, followed closely be teammate Seely in fifth with a 45.636-second lap. Bogle was 14th at 46.903.
•In the evening program, Seely finished a solid runner-up in the second heat race, advancing directly to the main event. Bogle and Canard were slotted in the first heat and finished fifth and seventh, respectively. Canard rebounded to finish second in semi 2, with Bogle fourth.
•It was an exciting night for Bogle, as he secured the best result of his rookie 450SX season with an eighth-place finish.
•With the Folds of Honor QuickTrip 500 NASCAR race set to run the next day just down the road at the Atlanta Motor Speedway, the Atlanta Supercross pits were filled with stock car racing’s biggest names. Most drivers just came to watch the race, but four actually took to the dirt for the NASCAR Holeshot Challenge. Among them was Roush Fenway Racing’s #16 Greg Biffle, who took second in that competition, aboard a Honda CRF250R.
•On Sunday, Seely was one of many riders and industry personnel to attend the NASCAR race, but he also got a special opportunity to take a lap in the official pace car before the race.
•On a weekend that saw Team Honda HRC nearing the halfway point in the 2016 AMA Supercross season, the factory squad’s MXGP counterparts kicked off their season at Qatar’s Losail International Circuit. The entire Team Honda HRC crew congratulates Honda Gariboldi’s Tim Gajser for taking the overall victory and Team HRC’s Evgeny Bobryshev for finishing third.
•This weekend, Team Honda HRC will be at Daytona Beach, Florida, for the 45th annual Daytona Supercross by Honda. On Friday, Canard, Seely, Bogle and the GEICO Honda 250 effort will take part in press day before heading to the Honda display tent for a pit party that will include an autograph signing, interviews and a raffle to benefit Ride for Kids.

THE FOCUS: Final Preparation for Daytona

Following the Atlanta Supercross, Team Honda HRC riders and crew headed directly to Florida to do some pre-Daytona testing near Dade City on a private track that replicated features typically encountered at the Daytona Supercross by Honda. Daytona is often regarded as the toughest and most physically demanding course on the AMA Supercross schedule, with the longest lap times and a hybrid design that is a cross between supercross and motocross.

“We’ll make a few changes to the bike because Daytona is usually pretty high-speed,” said Brent Presnell, mechanic for Trey Canard. “It gets really rough, but there aren’t a ton of changes, just a few tweaks here and there with suspension. The biggest thing is it’s beneficial for riders to ride a Daytona-type track because it wears them out differently then a standard supercross track, so this gives them an idea of what they’re going to be up against come race day.”

“Today was okay but I’m not happy with how tonight went. I was going fast all day long so there are a lot of positives to take out of that, but the main event was a mess. I just don’t know what some of the guys are thinking out there. [Ryan] Dungey came over on me during the start and then I had two incidents with [Jason] Anderson that weren’t my fault. The first time, when we both went down, was not intentional; I was trying to cut underneath him to make the pass, and he stopped, which made me hit his rear wheel. Then later he retaliated and took me out on the last lap, so that was ridiculous.”

“I’m frustrated and disappointed with tonight. I got a bad start again, putting myself in a bad position because it’s just so chaotic back there. I was trying to make my way through the pack but made a big mistake, got out of control and went down, which bent my front brake rotor. Every time it would make a revolution the pads would separate and I’d have to pump it up, so that made the rest of the race really tough.”
Trey Canard

“I’m really disappointed with the way the results ended up tonight. The day started well; qualifying was good, both riders looked strong and we were all happy with the bikes. Unfortunately, both Cole and Trey had tough main events with a lot of contact and some aggressive racing. Cole got off the line to a good start but came together with [Ryan] Dungey coming into the first turn and got pushed back. I think he was riding really solid, showing a lot of aggression, but he had a couple mishaps with [Jason] Anderson that didn’t help the results. Trey had a poor start and he was trying to work through the pack but went down and was stuck toward the back the rest of the race. I’m happy with Justin’s finish tonight; it was the best I’ve seen him ride this season. He looked aggressive and showed a lot of speed so I’m just hoping he can build on this and keep getting better.”

“The main was tough tonight but there are positives to take away. Qualifying was the best that I think it’s been all year overall as a team. Trey’s been on the pole before but to have both guys in the top five is really good. Cole showed a lot of speed in his heat race, transferring straight to the main, where I think he was riding extremely well despite a bad start. He was charging the track and making the passes he needed to before he had some unfortunate run-ins with Anderson.”

“The day was going well until we got into the night show, and it was pretty much downhill from there. Trey was riding awesome in the heat race but went down in the sand trying to change a line to get around [James], Stewart who had fallen in front of him. The semi was decent, but in the main event he was just stuck in the back-of-the-pack carnage. It’s not like it used to be where you could come through the pack pretty easily. Now when guys who could be winning races are finishing ninth and 10th, it makes it pretty challenging to make up a lot of ground.”