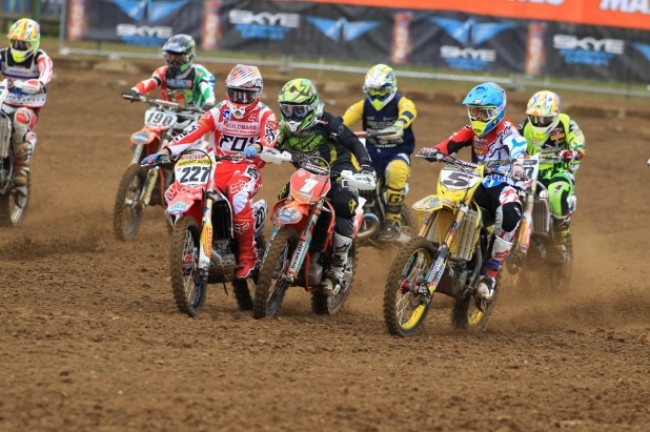 Fastest qualifier Max Anstie dominated race one to win by 14 seconds from a rejuvenated Harri Kullas who had his best result of the season. Steven Lenoir was again top three in third.

Race two was a similar story with Anstie proving t be the class of the field taking the win by 20 seconds. Steven Lenoir is proving a real championship contender with second place with Petar Petrov a fine third. Harri Kullas again rode well on the Suzuki in fourth with Lewis Trickett an impressive fifth. Not a good day so far for Ben Watson or Adam Sterry. Watson was sith in race two with Sterry ninth.

A red flag saw an early end of MX2 race two but yet again it was Max Anstie who was victorious once again to make it a clean sweep of wins on the day. With Ben Watson and Adam Sterry not finishing the final moto, Anstie looks to be back in contention for the title despite missing the first round! Bryan Mackenzie was second after a fine ride on the Kawasaki, Lenoir was third and in the top three yet again, it has been a brilliant day for the Frenchman at Canada Heights who takes second overall.  Petrov was fourth with Trickett in fifth. Another good ride for Kullas in sixth.

Shaun Simpson is dominating the British championship in 2015. He was the fastest qualifier at Canada Heights and won race one by eight seconds over Tanel Leok and Gert Krestinov who battled for second with Leok getting the verdict. Brad Anderson was fourth, Jake Nicholl in only his second race of the season fifth and Graeme Irwin sixth.

Race two had to be re-started after a red flag, but it made no difference to Shaun Simpson who won again, this time by fifteen seconds. Gert Krestinov won the battle for second, with Mr determined Brad Anderson right behind Krestinov in the third and Leok just behind Anderson in fourth! Former British Champ Whatley rounded out the top five with Nicholls in fifth.

Shaun Simpson dominated the third moto to make it another clean sweep of victorious. The Scotsman is in another league and is also the only rider in the MX1 British Championship that’s raced all the GPs so far this year – it’s not a coincidence. The level of MXGP just keeps climbing and if you aren’t in it it is clear you are getting left behind.  Behind him the battle for second was on with Tanel Leok edging out Kristian Whatley for the runner-up position. Gert Krestinov was fourth in Brad Anderson fifth. Nicholls continued his comeback with another solid sixth.