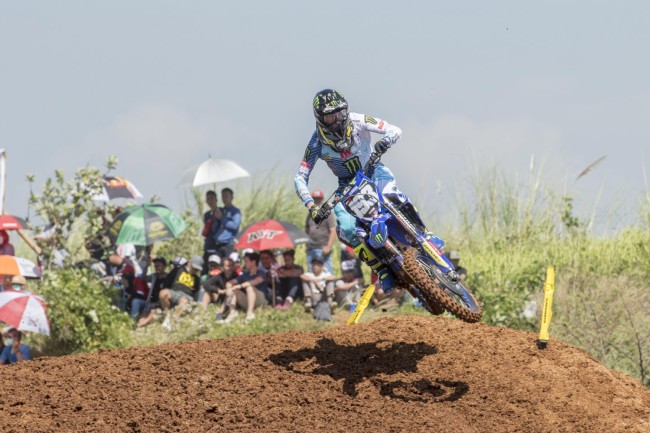 Good news for Belgian fans as after crashing on the sighting lap before moto two in Indonesia and twisting his ankle, Jago Geerts has been passed fit to race the final round of the Dutch Masters of Motocross taking place this weekend.

The Kemea Yamaha rider has the championship lead and has a real chance of winning the title this weekend. The Belgian says he enjoys racing the Dutch Masters of Motocross, “I really like the Dutch masters of Motocross series. It is always really good preparation for the GP races beceause the tracks are good and the riders are fast”.

As the final round of the Dutch Masters of Motocross takes place alongside the zwartecross with a music festival it means theres a huge crowd in attendance. There was over 200,000 at the event last year. Sure, they won’t all watch the racing but it’s still going to be a huge crowd.

“Its always a special feeling riding in front of such a big crowd. The one thing I don’t like so much about the Zwarte Cross is that the track is flat and fast. But thats the same for everyone”. Geerts stated regarding the event.

There’s a good chance that Geerts can clinch his first MX2 title this weekend during his second year on the MX2. However, with the Belgian just leaving school he can now fully focus on Motocross – he could be in the hunt for a World Championship crown in the near future.

“Im really excited for the weekend and I’m going to my best to win the championship. But we will see how its going to work out”, Geerts had to comment regarding possibly winning the title this weekend.