Can Irwin and Watson wrap up the British titles? 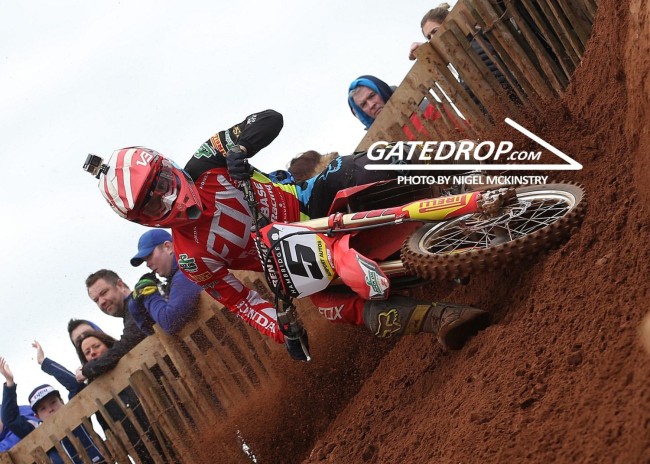 This weekend round seven of the Maxxis British Championship takes place at Preston Docks. There is a good chance that at least one of the championships will be wrapped up this weekend at the penultimate round.

In the MX1 class there has been plenty of injuries but you can’t argue about Graeme Irwin’s recent great form.  Irwin is in a winning streak as he has won the last six moto’s in the series which is very impressive. The Buildbase Honda rider has a fifty-two point’s advantage over Gert Krestinov meaning he just needs to beat the Estonian this weekend – he can even afford to lose two points to him.

Irwin will be hoping to secure the championship this weekend and then start working hard for the Motocross Des Nations event later in the year where he will be representing Team Ireland.

Irwin is also set to become the first British Champion from Ireland since Gordon Crockard won his last British title back in 2003. It’s been a fourteen year wait but it finally looks to be happening this year thanks to Irwin’s super performances.

Rumours suggest that Irwin has picked up an MXGP ride for the 2018 season which will be a new chapter in his career but it will be nice to clinch the British title before fully focusing on MXGP and competing against the best riders in the world on a weekly basis.

In the MX2 class, Ben Watson has forty-two points advantage over Martin Barr. If Watson can gain eight points on Barr then he will win the title this weekend.

The Hitachi KTM rider has been in good form but had a bad day at round six. However, despite only picking up thirty-six championship points he still gained one point in the championship race.

However, Barr will be determined to make sure he does everything in his power to make the championship chase go down to the final round. Barr’s speed hasn’t been a problem but his starts haven’t done him any favours. That is something Watson could take advantage of this weekend.