Can Cairoli win the title at the USGP? 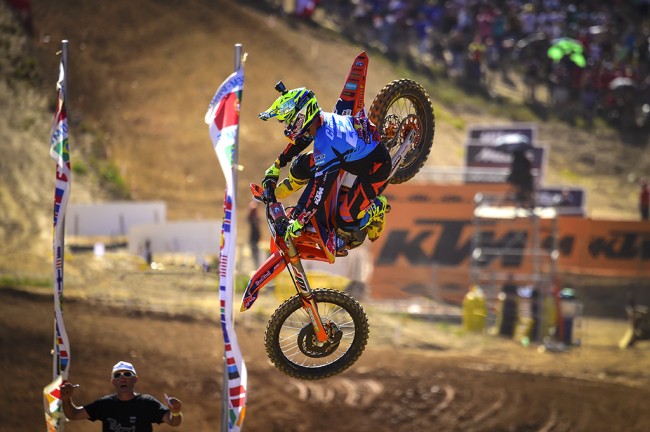 After all the hype about Jeffrey Herlings following his domination at the last round of the US Nationals and the expected backlash by Eli Tomac this weekend, it’s seems the man leading the world championship might have been overlooked!

Tony Cairoli will win his ninth world title if leaves with a 100 point over Jeffrey Herlings, Gautier Paulin and Clement Desalle this weekend. Put simply, if Cairoli beats all three in Florida he will win the world championship in the USA with two rounds to spare!

That is motivation enough and you know Cairoli will also want to get some revenge on Eli Tomac who beat the Italian last year, when Cairoli was unwell and not at 100% fitness. This year he is on his game – but Cairoli also won’t want to risk too much and cost himself the title – it will be a delicate balance.

It’s not an ideal situation for the Italian for a race that for everyone else is about bragging rights and not a championship, but part of Cairoli will probably want to show America the speed he has had this year and let them see he can beat their champ, Tomac, in his backyard, and show he can still beat Jeffrey Herlings.

The temptation will be there, he has a huge lead in the title chase, and he is always good in the heat.

Cairoli has been picking and choosing his battles recently, and while it looks like he might just be in championship mode don’t be surprised if Cairoli decides he will push for the win. If he feels comfortable I think the Cairoli might just go for the victory if the risk to do so isn’t too high!

And let’s not forget Tim Gajser and Romain Febvre, who shouldn’t be too far away either from the win after both secured a moto win each in Sweden, this might not just be the Herlings/Tomac show in Florida!

As you can see below, the current MXGP championship leader has been putting in the work at Lommel in anticipation for the showdown in America: