Cairoli: “With Jorge (Prado) it is always full-gas every week” 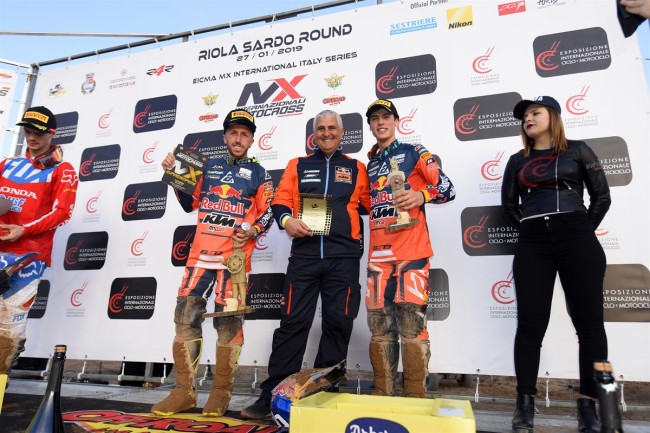 Red Bull KTM’s Tony Cairoli and Jorge Prado both now lead the MXGP and MX2 FIM World Championship standings respectively and the Italian and Spaniard are further examples of how the KTM Group have established a rich and very effective racing set-up behind the scenes.

Cairoli, 33 and Prado, 18, have been training together over the last year: the MXGP nine-times champion filling a mentor role alongside Team Manager Claudio De Carli for the teenager MX2 star. Over in the USA KTM have enlisted the help of famed trainer Aldon Baker and his Florida training facility for the last three years and the combination has helped secure the last three 450SX titles with different athletes.

Numerous parallels have been drawn between the two nine-times world champions Cairoli – the second oldest rider in the MXGP class – and Valentino Rossi (the oldest road racer by seven years in MotoGP) but the regenerative effect of training and riding with youth is now another similarity. Rossi has evolved as a rider thanks to his VR46 Rider Academy programme that has spawned the last two Moto2 title winners. Cairoli is still able to set the bar in the premier class of MXGP for intensity and performance and gives Prado credit for this sustainability as part of the structure created by De Carli.

“With Jorge it is always full-gas every week,” he claims. “He is always pushing and pushing and I cannot relax. For sure it is good. We always ride and train together and it helps during the week and for him also. It’s a nice match.”

Cairoli can use Prado’s energy and exuberance as a yardstick but the Spaniard also gains substantially from the link. So far in 2019 #62 is unbeaten in all ten motos he has raced with the 250 SX-F. “I’m lucky I have Tony next to me training and that means I have the best reference,” he reveals. “Sometimes we’ll be at the track and he’ll pull a very good lap and I cannot get close to him! So I know there is still some room for improvement! I feel there is a lot of work to do to get to that standard. It is difficult now at this level to get better…but with Tony as a reference I’m able to push every day.”

Cairoli’s says the principal ingredients to his longevity involve relatively few visits to the operating theatre and an innate sense of fun and passion for what he does. “I think I am almost the oldest in the class but it does not feel like that,” he says. “I still like riding, training and being at the races. Luckily in my career I did not have so many injuries and this is helping a lot because when you wake up in the morning you don’t have too much pain, or like other people have. I think the passion for the bike and the sport is helping me a lot all these years. While I feel like this I will keep going.”