Cairoli, Prado and Vialle on Lommel 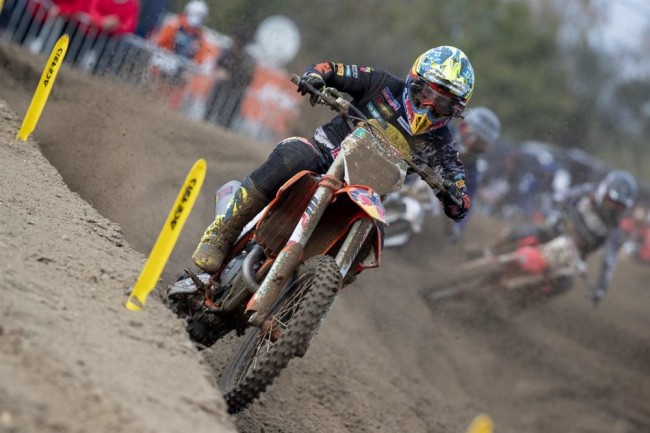 Red Bull KTM news from the Grand Prix of Flanders:

The first of three MXGP fixtures this week in the extremely technical and physical sand of Lommel took place in cold conditions in Belgium. The Grand Prix of Flanders brought the 2020 campaign to thirteen rounds with another two to come in the next seven days. The deep terrain – that should see layout changes for the upcoming repeat visits – was bumpy and difficult and forced many mistakes.

Jorge Prado – A previous winner at Lommel in the MX2 class, Prado showed his excellent sand acumen by setting the fastest lap in Timed Practice. His first start with the KTM 450 SX-F was strong and he ran top three with Tim Gajser and Gautier Paulin for company. Prado finished 3rd and opened the second moto with sharper intent: his holeshot was the 14th from 24 starts in 2020. The 19-year old was sent to the ground briefly after contact with Jeremy Seewer but remounted and earned 4th by the end of the 30 minutes and 2 laps distance. Prado has now been on the podium for six of the last seven MXGPs. His form has taken him up to 3rd in the championship standings and only 11 points behind teammate Tony Cairoli.

Tony Cairoli – Cairoli was 14th in Timed Practice and took a position in the middle of the start gate for the two motos. The power of his KTM 450 SX-F helped the Sicilian into a top five launch for the first race but he was pushed wide and off the side of the track in the opening corner. Another tangle with Dylan Walsh left the former world champion with a lot of work to do. He finished 13th. In the second race Cairoli was better placed and just behind the leaders. 6th place allowed him to enter the overall top ten. The gap between Tony and Tim Gajser at the top of MXGP is now 48 points in favor of the Slovenian.

Jorge Prado:“It was a positive day. The track was very rough and it was good to get used to the conditions because we still have another two rounds to go here. We also made some improvements to the bike, so that was useful. I had a perfect start in the second moto and was block-passed by Seewer while holding a good position. I rode strongly to make sure of 4th though and 3rd overall was pretty decent. I’m very happy to be 3rd in the championship after the way the year started. We are still charging.”

Tony Cairoli: “We expected a better result here. We’ve had some good races in the past, so I’m a bit disappointed. Again, we struggled in the Timed Practice and from my gate-pick I was pushed out in both starts and was outside the top ten. In the first moto I even crashed on the first lap. I came back to 13th but for sure is not what I am capable of on this track. In the second moto I tagged onto the back of [Gautier] Paulin and we had a good rhythm. I finished 6th but we want to be much closer to the podium. We have to see what we can improve for Wednesday.”

Tom Vialle – A brilliant display by the MX2 World Championship leader in only his second visit to the Lommel sand. Vialle bagged another two holeshots on his KTM 250 SX-F to take his total to 16 for the season. He rode to 2nd place in the first moto behind Ben Watson and then studiously followed title rival Jago Geerts in the second. The Frenchman applied pressure to both riders in the final laps. He slipped off the bike briefly while chasing Watson and was later close to Geerts but could not force a pass. He was 2-2 for the day. Vialle’s collection of 11 podiums from 13 – and four in a row – means he added another point to his advantage over Geerts with the margin now at 43.

Tom Vialle: “I was feeling really good in both motos today, and I really enjoyed track: the bumps and the corners were fun and a challenge. I had two good starts, and Jago was pushing a lot. I was following his lines and had a go at trying to catch him in the last few laps. I just missed out. Anyway, I’m really happy because this is my first win here in the Lommel sand in only my second GP. Together with Joel and the team we worked a lot for this one.”