Cairoli OUT for next two GP’s! 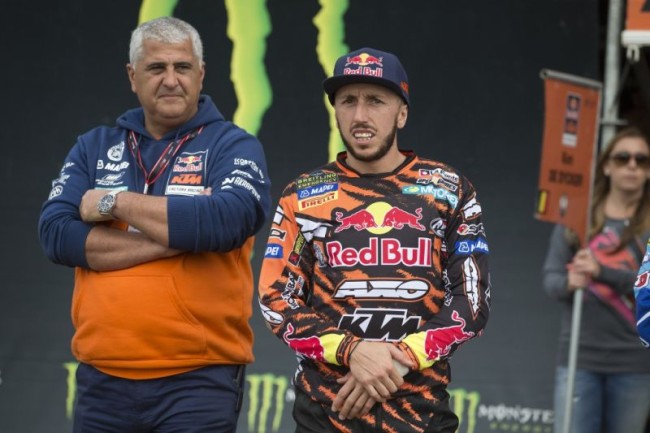 Cairoli sustained a fracture below the left elbow while competing in the MXGP in Maggiora, Italy on the weekend of June 14. Although the eight-time World Champion has competed in three other MXGPs since then, It has only leg under Considerable pain and only leg possible Because of Tony’s incredible will to compete and to win.

After the latest consultation with the sport’s Belgian specialist Dr. Claes and following Subsequent discussions with his team and KTM Motorsport Director Pit Beirer, Cairoli has come to the difficult decision to take a break from competition to allow the fracture to heal properly.

The medical tests have revealed that continued riding is not allowing the fracture to heal properly and the natural calcification process is being hindered. Tony’s decision was not made easier by the fact that he is Currently in second place in the chase for the 2015 title.

Claudio de Carli, Team Manager of the Red Bull KTM Factory Racing confirmed That Cairoli would continue to have fortnightly medical assessments and a decision about When He will return to racing will be made ​​accordion thing to his healing progress.

“Antonio HAS an impressive courage and determination, and he always wants to race, as” said Claudio de Carli, “But some situations could have a negative impact on his future. For me the rider’s health and well being is the most important, and this is Entirely in keeping with KTM policy. Despite the injury, Tony was making every effort to keep his title chances alive, but this medical checkup showed a worsening of the clinical situation that can not be denied. In May he needed a small operation on the elbow, if there is not sufficient is a response from taking a break in racing.Currently it is not possible to estimate When Tony will return to the track, but I think I can say that he will not be bootable to race in the next two GPs. “

“It has not any bone fun to race with an injury and not be editable to fight for victory, Although I always tried my best,” Cairoli confirmed. “I very much regret That I have to stop but unfortunately injuries are part of our sport and this is something we can not do anything about. I will do everything I can to recover as soon as possible, and to be back on the bike and on the race track. “

Cairoli’s decision is fully supported by Pit Beirer: “What we all thought would be the most exiting motocross season ever has ended in a disaster for quite a few teams and a lot of disappointment for the sports fans. For us it is very sad to see and know that Tony has gone through terrible pain since Maggiora and is still unable to get anything back from the outstanding effort He Has put in to speed up the healing process. Tony HAS won five MX1 / MXGP titles in the last five seasons for us, so we are just very proud and happy That until now we were bootable to enjoy five seasons together perfectly. Now we face a Difficult moment-which will in fact, just bring us all even closer together. “

“Health always comes first and we fully support Tony in this decision. He needs to fully recover and we want to see him back on the bike with a big smile on his face. There are still far too many riders sitting at home with injuries and we wish all of them a speedy recovery and a speedy comeback to the GP paddock, “Beirer added.