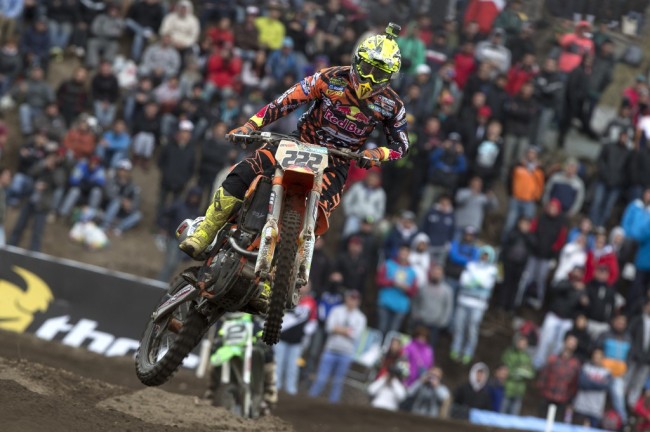 Red Bull KTM Factory Racing came away with a podium third for Antonio Cairoli in Round 3 of the MXGP World Championship and a podium second for MX2 factory teammate Pauls Jonass to wrap up the weekend’s MXGP racing in Patagonia, Argentina.

MXGP
Tony Cairoli, as tenacious as ever picked up a 2-2 result for his podium third, which given that he had a big crash on the final stages of the opening moto was a very strong result. He went down hard on the track just a few corners before the finish but had a big enough gap to hold onto second. Although stunned he managed to scramble back on his KTM 350 SX-F and finish the race.

The Italian rider deployed his well-known fighting spirit in the second heat and managed to keep rival Clement Desalle in check. Desalle was heading for second and a possible overall win, but Cairoli went on the attack in the final stages, overtook him and effectively changed the order of the final overall podium. GP winner was Max Nagl, with Desalle in second and Cairoli overall third.

Cairoli and Nagl are on equal points in second place in the championship standings after the third round. They both have 123 while Desalle currently has a ten point lead and carries the red plate through to the next round.

Cairoli said he was reasonably satisfied with the outcome of the weekend. “Every time on the podium, that’s the way to the championship,” he said, adding: “I wasn’t really feeling good after the crash in the first moto and I was a bit dizzy at the start of the second. I lost my rhythm, the sun went down and Max (Nagl) passed me. After that I was feeling okay so I tried to pass Desalle and maybe get closer to Max, but by then the track was tricky and bumpy and I didn’t want to risk a crash.”

Teammate Ken de Dycker finished 12-11 for overall twelfth. De Dycker said a small problem in Saturday’s qualifying put him at 22nd on the starting gate and this had made it difficult for him on race day. “But finally I had two motos where I started back at 22 and almost made it into the top ten. I need to get a good start, hopefully more confidence and things will go better in the next GPs.” Tommy Searle, the third member of the factory team is currently out injured.

MX2
The factory team’s rookie Pauls Jonass continued to be up with the front of the competition and came away with 2-3 result for overall second in the MX2 Grand Prix. But he also regretted being involved in a race incident that saw him touch teammate Jeffrey Herlings in the heat of the battle in the opening stage of race one. Herlings crash damaged his handlebars and made it impossible for him to continue but he made a powerful comeback in race two to take a comfortable victory and still wind up overall seventh in the GP.

Jonass: “I found my rhythm and I am feeling confident on the bike and the track but I was pretty bummed because I touched Jeffrey and then he crashed. It was my fault and I didn’t want to do that.” Jonass added that he didn’t want to take any risks in the second heat and was happy to settle for 2-3 and overall second.

Despite his crash Herlings was upbeat about the weekend. “This was a great GP, there were a lot of fans and I really liked the track. I was fast in every practice, I won qualifying and I had good starts. Then I had an average start in the first moto and touched another rider over the jump. But I came back strong in the second moto, I still have the red plate and I’m going home safe,” he said.

Herlings and the GP winner Dylan Ferrandis leave Argentina both with 125 points, while Jonass is in third place with 112. Herlings and Jonass ride the KTM 250 SX-F.

The next round is on April 19, 2015 when the championship returns to Europe and is hosted by Arco di Trento in Italy, where riders can expect a tight, hard pack track surface in contrast to the sand of Patagonia.