Cairoli, Jonass, Herlings and Coldenhoff on their weekend 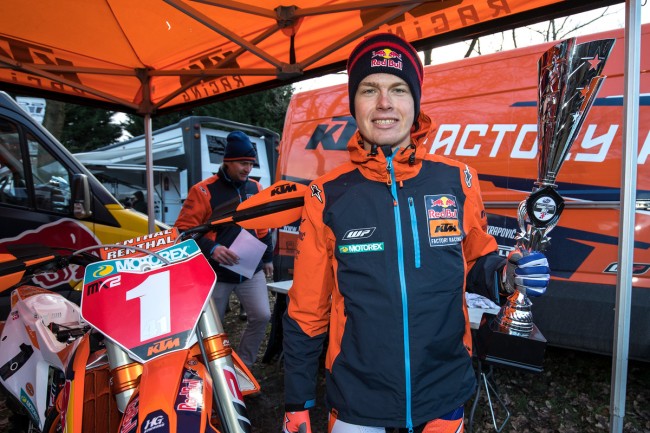 PR-The dark sand of Hawkstone Park was the site of the popular annual International race in the UK and drew a host of MXGP names to England’s midlands. It was a satisfactory meeting for Red Bull KTM trio Jeffrey Herlings, Pauls Jonass and Glenn Coldenhoff. Herlings ruled both MX1 motos and the Superfinal on his 450SX-F but had to catch and pass teammate Coldenhoff who was quick and impressive on the rough terrain (taking three holeshots) despite the slight discomfort of his left hand injury; picked up before the opener of the Internazionali D’Italia in Sardinia over a week ago.

Jonass was the star of the MX2 class on his 250 SX-F. The world champion went 1-1 and pinched a top five classification against the larger 450s in the Superfinal.

Herlings: “It was a really good day. We were fastest in qualification in the morning so we had the best gate pick all day. I felt good on the track and the weather was a bit gnarly; there was rain and snow! I felt strong and good on the bike and the team did a great job. The conditions have not been easy and I think the club made some excellent work to get the track as rideable as it was. We’ll have our last race before Argentina in France next weekend and I haven’t ridden there for a long time so I’m looking forward to it.”

Coldenhoff: “The last two weeks haven’t been the best so to be fourth in practice and then to have a good day was very positive. I love coming to Hawkstone, I always ride well here and get good results and it proved to be that way again: three holeshots and three times second place so I cannot complain. Pauls and Jeffrey won so I don’t think it could be any better and this was perfect training for the upcoming GP series.”

Jonass: “I’m really happy. It was my second year at Hawkstone and there is a lot of racing in one day. It is really good training, and the track is pretty tough, especially in the Superfinal when it was getting very rough and we’re against the 450s. I took it easy in the Superfinal when the sun was low and it was tricky to see; I still think fourth place against the bigger bikes was pretty good.”

Tony Cairoli was the undoubted main draw in the second round of the Italian contest, taking place in the MXGP world champion’s home land of Sicily and at the hard-pack Noto circuit. Cairoli finished second in MX1 first in the ‘Supercampione’ race and continues to lead the competition with one round to run – at Mantova next weekend.

Cairoli: “I’m happy because it was a difficult race on a sketchy track. [Romain] Febvre found a way to pass me through the backmarkers in the first moto and I couldn’t get him back; it was hard to pass here. In the second moto we managed to attack the leaders after the first three or four laps and took the win; I was really happy with that and am already looking forward to next weekend.”

Mantova, and the final major International fixture before the first of nineteen MXGP races at Neuquen in Argentina – La Capelle-Marival in France – next Sunday will be the last engagement for the Red Bull KTM crew before all thoughts turn to South America.

A full gallery of action, static, portrait and detail photographs of each rider in the 2018 Red Bull KTM line-up with their respective 450 SX-F & 250 SX-F machinery are now available on KTM media server and can be found by clicking this link