Cairoli: I’d like to dedicate this victory to Igor Cuharciuc 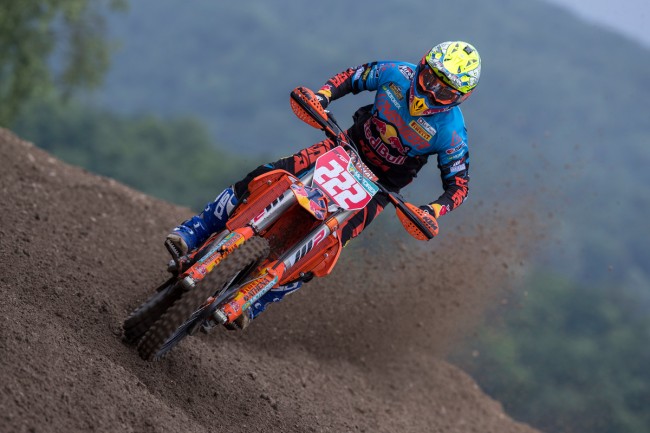 Tony Cairoli rode to a fifth Pole Position of the season on Saturday with his KTM 450 SX-F by catching and passing world champion Tim Gajser. It allowed the Sicilian first choice in the gate for two motos on Sunday with a sunny climate replaced by clouds, the occasional shower and changeable weather.

The first thirty minute and two lap dash saw Gajser take the holeshot and Cairoli slot into fourth place, Jeffrey Herlings occupied an outside gate but could rise no further than ninth while Glenn Coldenhoff stalled the bike away from the line and spent the sprint clambering back as high as possible. The running order largely remained the same for the duration of the race with lap-times marginally different. Cairoli managed to demote Gautier Paulin in the last five minutes and then pressurised the rear wheel of Clement Desalle in the final laps but was unable to gain second spot. Herlings ran to fifth and Coldenhoff was just outside the top ten in eleventh after a decent comeback.

The second moto was key to the Grand Prix classification and by exiting the first corner in second behind Gajser again Cairoli put himself in an ideal situation. The eight times world champion studied his rival’s lines for five laps and confidently moved to the front, from which point he rode alone to an eighth moto victory from twenty-five. A 3-1 meant a ninth winners trophy for 2017 (the 83rd of his career) and a margin of 92 points over Desalle in the standings.

Cairoli: “I’m really happy to ‘skip’ this GP with a victory. My goal was make the podium because I’ve never had much of a good feeling with this track and I struggled a lot in the past. This year was better because we have been working well lately with the bike and I feel it’s working almost perfectly for me: I enjoy riding. It was also the first time I rode here with the 450 and that was easier than the 350 because I had to be more aggressive and missed the extra torque of the 450 in some parts of the track. I made too many mistakes in the first moto and had some arm-pump and by the time I found a good rhythm then it was a bit too late. Third was OK because the points are important for the championship and that’s what we are looking at now. I’d like to dedicate this victory to Igor Cuharciuc. It was a difficult night for everybody and riding the bike on the spot of the accident was not easy. I want to say we are thinking of the family.”

Herlings was again in the midst of the top ten and became part of a riveting battle with four other competitors for second place. Despite the limiting nature of the Loket trajectory Herlings made up positions to earn third spot and fourth overall. The Dutchman has moved to third in MXGP and just 18 points from a KTM 1-2.

Herlings: “The starts cost me the win because both times I was outside the top ten. After the rain it was so tough to pass. [starts] They have cost me a couple of times this year and I’m not sure what to do any more because we have one of the best bikes and it is something I need to be doing better. Hopefully at Lommel we’ll make it work but the start is a little less important there. I have been very consistent again today and I’m third in the championship now and close to second but it has been a while since I’ve been winning.”

#259 lost ground out of the top ten after a bobble into the corner at the bottom of the fast step-down on the first lap and worked hard all moto to eventually take Max Anstie for eleventh on the last lap. Glenn ended the day and the weekend with ninth overall.

Coldenhoff: “It wasn’t a bad weekend and I was actually pretty good. In the first moto I don’t know what happened but I stalled my bike right after the gate and on a track like this it is quite difficult to come back to the front. In the end I finished eleventh which was pretty OK. The gate fell late in the second moto and I was one of the first to get moving and everyone to my right was also twitching. On the first lap Tonus made a mistake and I was right behind his rear wheel; I lost six places or something and the moto was already done. I pushed as hard as I could and managed to get Anstie. 11-11 for ninth overall and a result in the top ten but these are not the results we are working for. We are definitely looking for more.”

Pauls Jonass completed a Red Bull KTM Factory Racing Pole Position sweep on Saturday with an unchallenged run to first place with the 250 SX-F, Jorge Prado was close behind in second spot after both bikes entered the uphill left turn at the front of the pack.

Powering away from the gate with the same potent grunt of the SX-F Prado almost seized the first moto holeshot (missing out by centimetres) and held his teammate at bay for most of the swampy moto in the wake of a heavy shower of rain. Jonass used his superior Grand Prix experience to eventually snare second place behind the escaping Thomas Covington and gained more championship points for his tally over Jeremy Seewer (the Swiss down in fifth). Prado’s top three result was his first since a maiden GP victory in Italy for round five of the campaign.

Jonass attacked a drier second moto with gusto and passed leader Prado in the formative stages with the leading pack closer together. The Latvian was firmly in control and the subsequent chequered flag increased his formidable sheet of statistics further: 12 moto wins from 26, 6 triumphs and 11 podiums this season. He was also able to extend his championship cushion from 38 to 47 points over Seewer.

Prado hung on for sixth which gave the Spaniard a top five ranking in the Grand Prix list and his best classification since a decent weekend at the French round, where the rookie claimed sixth.

Jonass: “I was feeling good all weekend. I didn’t get the best start in the first moto: the track was a bit muddy and it was difficult to make passes. I was struggling in the first laps and it was difficult to pass my teammate. I ran out of tear-offs so it became even more difficult but I still managed to finish second. The second moto start was much better and I made the pass on Jorge quite quickly and could make a gap and control the race. The track was sketchy; slippy in some parts and with traction in others. I ended my season at this track last year and it was really disappointing. I think since that crash I have changed a lot mentally and with my riding style. I am a different rider now and it is a nice feeling to come back and win the overall.”

Prado: “Quite a good weekend and I felt fast on the bike. In the second moto I tried to pass [Brian] Bogers but crashed and, well, it was a shame not to make the podium. Anyway, it was good to be back at the front again and be battling the leaders. It was the first time I’ve ridden here so I didn’t know what to expect. After the rain the track was really slippery but it dried quickly and when Jonass passed me I was able to find a rhythm. It was bumpy but there were quite a few options.”

The FIM Motocross World Championship will come together again for the immense technical and physical challenge of the Lommel sand for the Grand Prix of Belgium in two weeks time.