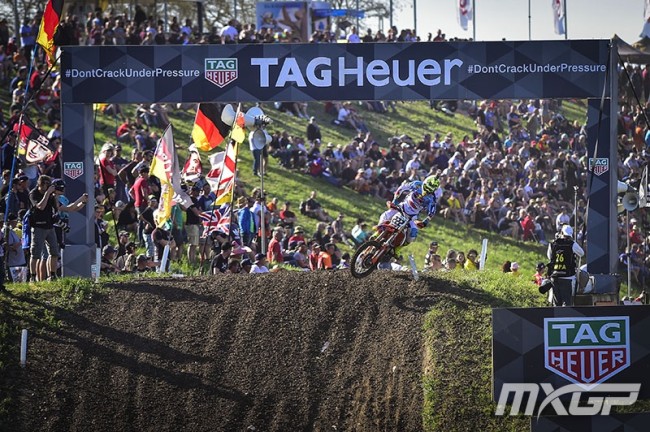 The gnarly old school clay track that sprawls itself over the hills of Teutschenthal always spawns incredible scenarios. Last year we saw both red plate holders crash out of the grand prix here, while this year, at the seventh round of the FIM Motocross World Championship, it raised the race intensity ten fold with Red Bull KTM Factory Racing’s Antonio Cairoli and Jeffrey Herlings being pushed to the wire in both races for the race wins and the grand prix overall in their respective classes.

The 8th of May is officially the Easter of motocross with the rebirth of the eight-time FIM Motocross World Champion Antonio Cairoli who won his first grand prix since the MXGP of Great Britain, which took place on the 24th of May 2015. “I’ve been searching for this win for some time now” He said, “I’ve been missing some speed but I started to feel good already in Latvia. Now I hope to be here on the podium and fighting for the win every weekend.” The popular Italian has the best track record here in Teutschenthal and has now won four grand prix’ on this soil.

Honda Gariboldi’s Tim Gajser is arguably the most exciting rider to watch on the track. The Slovenian is just on the edge at all times. He doesn’t care, he’s strong and he’s confident and he will pin it to the checkers in every race. In race one, he threw everything but the kitchen sink at Tony Cairoli, but couldn’t make a pass stick and in race two he bounced back to fourth after clipping fellow Honda rider Evegeny Bobryshev in a battle for second. His results for the day were enough for second overall, his seventh consecutive podium and, more importantly, the championship lead.

Team HRC’s Evegeny Bobryshev nursed his injured shoulder to an impressive third overall this weekend. The Russian said “I had no time on the bike during the week because of my shoulder. The track was really tough today with all of the ruts and the square edge bumps so to be third on the podium, I am really pumped because if you knew what I have and the pain I was riding through, man it’s just really amazing.”

Chainsaws and air horns were going full blast for Rockstar Energy Husqvarna Factory Racing’s Max Nagl who charged to a third in race one and sixth in race two, after he binned it while in third. The German actually tied with Bobby for third overall but the silverware goes to the person who places best in the final race and that was Bobryshev, who finished second.

There’s nothing like a bit of controversy to spice things up, especially between teammates. Monster Energy Yamaha Factory Racing’s Jeremy Van Horebeek and Romain Febvre had a discussion on the start line before race one regarding gate pick. Coincidently or not, Van Horebeek and Febvre came together on the opening lap of that moto and Febvre hit the deck. Febvre struggled to come back in that race and only finished tenth. In race two, he put in a solid ride for third, which left him in fifth overall and has seen him relinquish the red plate.

Something you never expected to read this season, ‘Red Bull KTM Factory Racing’s Jeffrey Herlings had his work cut out for him’ this weekend as he battled illness and a blazingly fast Jeremy Seewer to remain unbeaten this season. Herlings is used to steam rolling this class, so he was a little bit fired up by the challenge, but regardless of that, he won both races for his 54th grand prix victory.

You’d never guess that Monster Energy Kawasaki Racing Team’s Dylan Ferrandis has literally just been given the all clear to race. He landed on the second step of the podium for the second time this year and tributes his good results to his awesome starts where he took the Fox Holeshot in race one and missed it by a hair in race two. “I’m surprised because I didn’t ride so much during the week because I was really tired and I had a bit of pain in my shoulder, but I am happy to be back on the podium.”

Team Suzuki World MX2’s Jeremy Seewer left his diesel engine at home this weekend. Instead he was running on 100% race fuel as he rode like a man possessed all weekend. The Swiss rider was fastest in Free Practice and Timed Practice on Saturday and finished second in Qualifying. He crashed in the first moto today and came from around twentieth all the way to fourth, but the real head turner was when he put the challenge to Herlings and almost won the final race. The Suzuki star on the rise finished third overall.

It was another weekend of highs and lows for Rockstar Energy Husqvarna Factory Racing’s Max Anstie who was third in race one and led the best part of race two before he threw away his four second lead with 6 mins to go. It’s safe to say the Brit will be frustrated, but at least he salvaged fifth in that race which was enough for fourth overall, while Kemea Yamaha Official MX Team’s Benoit Paturel put in two solid races to round out the top five.