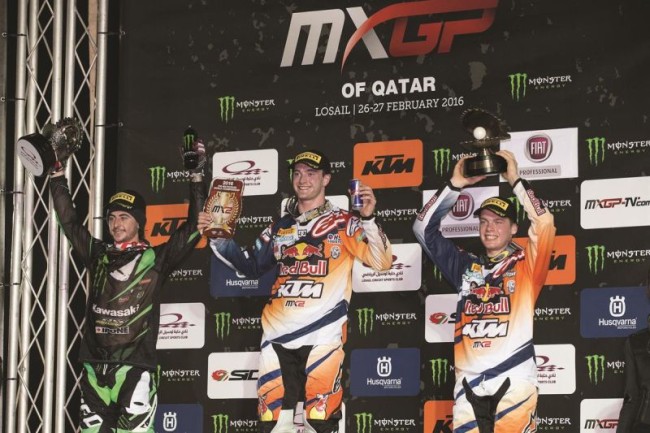 MX2
Jeffrey Herlings, who lost much of the last two seasons with race injuries put in two confident motos for what was his 48th career overall MX2 victory. Dylan Ferrandis was second and Herlings factory teammate Pauls Jonass finished third overall with a 3-3 moto result. Jonass, who was vice champion in MX2 in 2015 also missed a good month of pre-season preparation on the KTM 250 SX-F with an injury to his thumb. Davy Pootjes, the third member of the MX2 trio crashed out of the first moto and did not start in the second.

Herlings opened his bid for the win with a well-judged first moto. He was fifth at the start, with both of his younger factory teammates in front of him, and with Ferrandis in the lead. Herlings kept his distance in third place while Ferrandis and second placed Jeremy Seewer fought it out in the front in the opening laps. Then ten minutes into the race, Herlings moved up to second to shadow Ferrandis and successfully attacked for the lead in the final stages.

Boosted by his first moto win, Herlings got away well in his second race and was in the lead at the first corner. Ten minutes into the race he already had a three second lead and went on to ride, untroubled, to a confident 17-second win to seal the GP and leave with 50 points on his scorecard.

Herlings: “I didn’t really feel I was riding like I should be this weekend except in the second moto, when I felt comfortable and could get the max out of my riding. This weekend we were winning but we didn’t dominate but in the last moto, we did. Now we go to Thailand, it’s going to be warm but I want to make the best of it. I feel physically and mentally strong and I didn’t feel threatened by Ferrandis in the first moto. I felt comfortable and strong right to the end and when I had the opportunity and the right moment to make the pass I did it.” Herlings will return to Europe to train this week ahead of the next round in Thailand next weekend.

Jonass: “Maybe it was good that I didn’t ride any pre season races because I came here without any expectations. I wanted to do my best and to take some points and thought if I finish in the top ten it is already good. My (injured) thumb hasn’t been that good and last month I didn’t ride. I just rode three times the week before Qatar and that was tough. Already yesterday I felt good in the free and time practices.” Jonass will also train in Europe in preparation for Thailand.

Pootjes was the unluckiest of the trio of KTM MX2 factory riders, also embarking in his first full season of MX2. He hit a big stone in the first moto, crashed and broke his collarbone. “Tomorrow I will fly back to Holland and I will have surgery. It will take about two weeks to heal so it’s not that long. The first moto was going really good and I was sixth until the half way mark. But there was a big stone just before the jump. I got a kicker and had a big crash. I know the speed was good and after two weeks I can start riding again and I will be ready for Valkenswaard.”

Team Manager Dirk Gruebel was very pleased with his riders: “This was a perfect start for us and it was really nice to see Jeffrey back in action and showing his full potential. We saw what he’s able to do and his riding was really smart. A big surprise for me was Pauls. He has had injured ligaments in his thumb and just rode a couple of times last week for the first time and he pulled off two third places. Davy was also really riding well but he hit a stone and crashed and broke his collarbone.”

MXGP
Fastest KTM out of the gates for the opening MXGP moto at Qatar was Tony Cairoli’s new teammate Glenn Coldenhoff at third while Cairoli, the 8-times world champion in sixth place. By the 18-minute mark Coldenhoff was fourth with Cairoli tucked in behind him in fifth place. KTM-supported British rider Shaun Simpson was seventh. The three riders hung together right through to the closing stages and finished 5-6-7 with Simpson leading Cairoli and Coldenhoff.

Cairoli was faster at the start of his second moto and was fourth at the end of the start straight, but Simpson and Coldenhoff were further back at ninth and 16th respectively. With eventual winner Tim Gajser comfortably out front and Evgeny Bobryshev and Roman Febvre behind him it was up to Cairoli to try to fight for the minor podium place. Then 17 minutes into the race Febvre over-jumped and Cairoli moved into third. Shortly after he was able to capitalize on a mistake by Bobryshev and moved briefly into second place. However the other two riders quickly recovered and despite a final lap challenge, Cairoli eventually had to settle for fourth in the moto and overall fifth. Simpson finished seventh for overall sixth and while Coldenhoff fought back from his 16th place start, he had to be satisfied with tenth in the moto and overall ninth.

Cairoli: “I’m very happy about today because I didn’t know what to expect before coming here. I was only four times on the bike after a month so my goal was a top 10 finish and to get some points. It was even better because I was top five. That’s good for the feeling and for the motivation to see if I can improve. I still don’t have all my strength but I can see I can stick with the top positions and that’s a good sign.” Cairoli said he would continue working on building up his fitness and strength ahead of the next races.

Coldenhoff: “I didn’t show good speed in the last international races but yesterday in qualification I was always in the top five. We have improved already so I am happy with my riding at the moment. I got a great start in the first moto but I got some arm pump and had to drop back a bit because it was pretty sketchy out there. I had a terrible start in the second moto but I fought back to ninth place. In the end I made a mistake and Strijbos passed me. I tried to pass him back in the last lap but I wasn’t able to do it.”