Cairoli and Herlings talk about their victories! 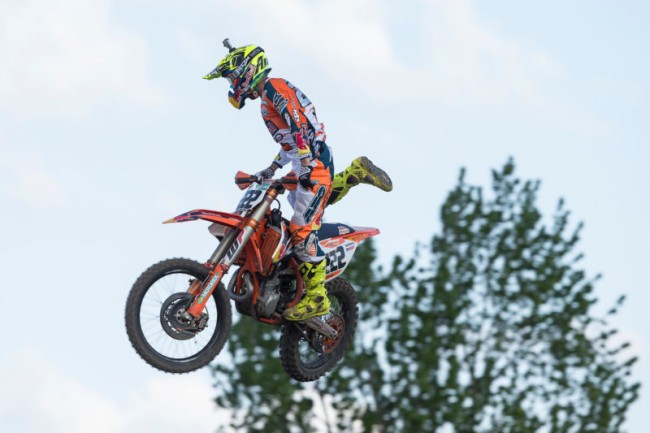 MXGP
It was a welcome return to the podium for Tony Cairoli who has been making a recovery from a lingering pre-season injury. In fact it was a near perfect weekend for the Italian, who was the fastest qualifier on Saturday then delivered two impressive moto wins to take home the GP silverware.

Cairoli kicked off his day with an inspired first race. He took the holeshot on the KTM 450 SX-F and immediately assumed control of the track while the two riders who currently top the leader board, Tim Gajser and Romain Febvre, were buried down in the pack. By mid race Gajser had found his way up to second place and went on the attack. He managed to briefly pass Cairoli but the Italian quickly responded and while Gajser threw everything possible at him, the eight times world champion was having none of it. He went on to win the opening moto by more than four seconds.

The Italian was equally inspiring in his second moto, grabbing the holeshot once again and taking charge at the front while the young pretenders did battle behind him. This time he was never really challenged throughout the race and while Evgeny Bobryshev and Romain Febvre battled it out for the minor podium places in the last stages, this allowed him to go into cruise mode in his final lap.

Cairoli, referring to his recent injury problems said: “I feel good for sure although I still miss something. The skills I have on this very difficult and technical track helped me to win today with a perfect score. Winning the qualification on Saturday and the two races today, it hasn’t happened often but I gained some strength this week in my arm and I very happy about that. I feel better and when you feel better you can respond and go on the attack.”

Team manager Claudio De Carli speaking about Cairoli’s win said: “We knew it was going to happen sooner or later. He already had a podium in Argentina and Kegums so it was only a matter of time. Tony and the team have worked hard on the development of the bike and on his physical condition, which has improved and this has helped him be where he is today. He really needed one victory to unblock him a bit and it came in Saturday’s qualification. This motivated him to do what he is capable of doing. Today he rode really well and when he was overtaken and made the pass again he did it with a lot of class like only Tony can do. We still have work to do to be 100% fit but we are going in the right direction.”

Cairoli’s win allowed him to start to narrow the points gap between the two leaders Gajser and Febvre who are separated by only eight points. He will also have the benefit of the support of his army of fans, the more than enthusiastic Italian ‘tifosi’, at home in Italy during next week’s races. Cairoli’s teammate Glenn Coldenhoff had a more difficult day, coming away with a 16-11 race result for overall 13th.

Team Manager Joel Smets said they continue to work with Coldenhoff who is very fast in training and extremely fit, but possibly puts too much pressure on himself when it comes to race days. “We all believe in Glenn,” he said.

MX2
Jeffrey Herlings, clearly suffering from a dose of flu and accompanying fever, was slower than usual out of the gates in his opening race. He put in a handful of laps at fifth and fourth position before advancing to second. He hit the front in the seventh lap after making the pass on early leader Dylan Ferrandis.

The Dutch rider then broke away on his KTM 250 SX-F, and while it was not with his usual velocity, he still finished to complete the opening moto almost 15 seconds in front. He remarked immediately after the race that he expected the second race to be much harder, as his illness was sapping his strength.

Herlings also has some problems at the start of the second race and in the process he hurt his ankle, which he said later was very painful. This incident made his ride all the more impressive because he still managed to salvage the win in the last lap of the race. He was fifth at the start after the incident with his ankle and sat out more than half the race between 4th an 5th before engaging in a serious battle with Jeremy Seewer. The two had advanced up to the front of the pack but it was still Seewer who had the edge going into the last lap. Herlings finally managed to make the pass stick and went on to secure the win.

Herlings: “My ankle hurts pretty bad but we have to make the best of it and now I have 5-6 day to recover. It has been a bad weekend also because I was sick but I managed to keep my winning streak going and that’s really positive.” When asked about his ankle injury Herlings said: “A rider cut me off and I sort of lost my balance and landed on my ankle. That was not so nice, but I guess that’s racing.”

Herlings now has 350 points, an unblemished scorecard, having won all fourteen races for maximum points from the seven rounds so far. His nearest rival is Seewer in second place with 270 points.

This weekend was hard work for Herlings’ teammate Pauls Jonass. He finished in third in the first moto but then crashed in the second corner of his second race and had to fight to come back for a 12th place finish. The result gave him overall eighth for the MX2, and he is currently third in the points.

Jonass: “Actually yesterday I liked the track because it has deep ruts and it’s very technical. Of course it gets hard at the end of the day but I still enjoy it. Yesterday I got second and I felt pretty good for today. Then I got arm pump after 3-4 laps and I struggled until the end although physically I felt okay. In the second moto I got the holeshot but then I made the classic mistake and crashed in the second turn. I’m very disappointed about that but I try to stay positive. Tomorrow is a new day.”

In Teutschenthal to support the team but not racing was Davy Pootjes, the third member of the MX2 factory team, who was injured in a mid week race at home in Netherlands. “Last week I crashed and someone jumped on me and I broke my collarbone in three places. The bone was broken quite badly and I need three weeks to help me heal. It is already feeling better and I can move it a lot. I think I need to rest for another two weeks before I can get back on the bike.”