Cairoli and Herlings give their thoughts on Argentina 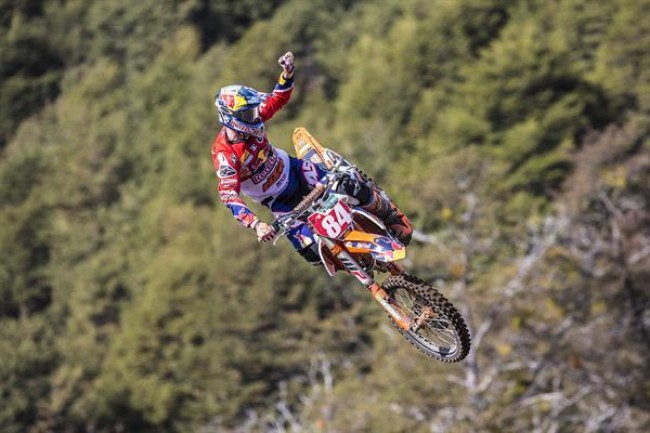 Riding in front of the enthusiastic Argentinean crowd, the day belonged to Jeffrey Herlings. He won his first moto on the KTM 250 SX-F by 35 seconds and while he allowed himself a celebratory final lap in the second, he still crossed the line 31 seconds ahead of the rest of the field. The minor podium places went to Jeremy Seewer of Switzerland and Russian Alexandr Tonkov but Herlings dominated both races and looked a winner for whole way. The Dutch rider is now unbeaten in the current season and after four rounds already has an impressive 48-point lead in the points.

Herlings: “We had a really good weekend and were the fastest. We won the qualifying on Saturday and on Sunday I was second at the start of the first moto and worked my way up to the lead and pretty much checked out after that. Then we did what we had to do in the second race and made it happen to get the 100 moto wins. I’m really happy about that. Hopefully we can get this winning going again in Mexico next weekend.”

Herlings teammate Pauls Jonass and Davy Pootjes wrapped up their weekend in 13th and 14th place overall respectively. Jonass has a nasty highside in the opening lap of his first moto and had to retire from the race. He opened a gash in his chin sustained in training recently and it had to be re-stitched but he still made a valiant attack in the second moto, managing to finish fourth to salvage some points. Second overall to Herlings at the start of the weekend, he is now in fourth position, one point behind third placed Tonkov. Pootjes, the junior member of the team also bounced back from a 16th place in the first race to 11th in the second.

Jonass: “I didn’t get the best start in the first race then in the second corner I hit a bump and had a big crash. I wasn’t able to continue because my bike wouldn’t start after someone ran over it. Also I didn’t feel too good and was pretty banged up. I didn’t know if I would be able to ride in the second race but I got a good start and made up some good points. I’m always a bit too aggressive at the beginning so I know I need to stay more calm and learn from my mistakes.”

Pootjes, just getting back to racing after a six week injury break, also suffered from arm pump on Sunday. Generally though he was satisfied with his result, saying: “I had a bad start in the first moto when another rider blocked me and I almost crashed. But at the beginning of the moto I came back to sixth, which was quite good and with good speed but then I got arm pump and also crashed. Then in the second moto my start was bad again but I came back from 12th to seventh and I was closing on the top-five group. Then I got arm pump again and finished eleventh – but I showed I have the speed of the to five.”

MXGP
Meanwhile in MXGP Tony Cairoli, riding in a very competitive two races fought hard and looked fast and confident on his KTM 450 SX-F in his two motos and his 2-2 result gave him a well-deserved second overall. It has also moved him up to overall third behind current red plate holder Roman Febvre and Sunday’s GP winner Tim Gajser. The race is a welcome positive turning point for the eight-times world champion after his recent injury difficulties.

Cairoli: “I’m very happy to be back in the podium after such a long time. For sure it would have been nicer to win but its getting better and better. I feel that every weekend, and that’s a good improvement. The podium is good for sure and we moved up to third in the championship. I already saw I am feeling better in the first rounds and I knew for Argentina I could try to do my best, even if I am still not in my best condition. I hope now to have a good condition and to feel I can win races. At the moment I am fast for some laps but I know I am missing my rhythm a bit. But the race speed is there.”

Cairoli’s factory teammate Glenn Coldenhoff finished sixth overall with his 9-6 result, which included a strong fight back in his second moto.

Coldenhoff: “The first moto I took a good start and I was in fourth. I rode pretty well but in the beginning if you are out in front, you are riding above your limit and that broke me up a bit in the middle of the race, then I got a bit of arm pump and had to slow down. I got an okay start in the second moto. I started a bit easier and I found my rhythm. I could make some passes and some guys in front of me made some mistakes so I was able to finish sixth. It was a solid result and I’m pretty happy with it. Also coming into this race I was able to do some practice with the bike and this gave me more confidence.”

Red Bull KTM Factory Racing Team Manager Joel Smets, speaking about the factory riders said: “When it comes to Jeffrey this weekend was a bit like I expected and not really a surprise. He is already on a high level since the pre season races. I’m happy he also stays focused. I didn’t see many mistakes so I’m happy with that. With Pauls, he has a lot of energy and when the gate drops there’s a lot of adrenalin pumping through his veins. I spoke to him about this and we have to try to channel this energy. But he’s a clever boy so that’s going to work.”

Smets added he was happy there were no real consequences for the big crash Jonass had in the first race because with such a crash the whole body gets a shock. Regarding Pootjes, he said he believed he was “on the way up.” “We can be happy with the speed he’s already doing. He wasn’t able to ride his bike for some weeks (because of his injury) so we didn’t expect him to be going for a podium with weekend. He’s riding with the top guys and in qualifying and in the races he showed he has the speed.”

Speaking of the MXGP duo he said Cairoli had made a careful start in Qatar and in Thailand. “But I was surprised, because today I didn’t expect him to be that strong so soon,” he commented. He said Coldenhoff was still missing some time to be up with the leaders but he has the potential to improve.