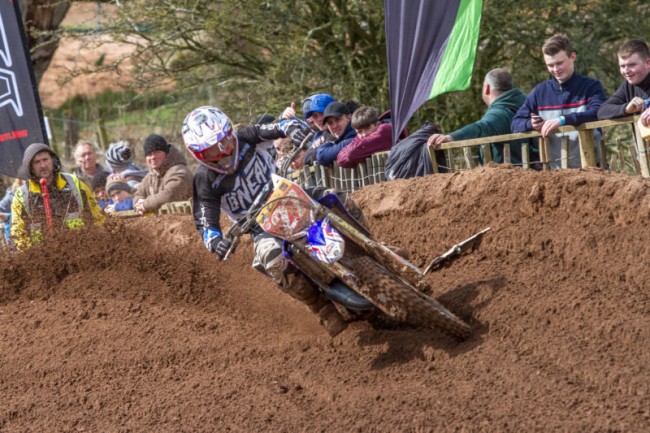 Last weekend was the second round of the ACU 125 British Championships in the sand (and snow) of Brampton Cumbria.

Slade Tressler was keen to improve on his third overall from Fat Cats.

The tight nature of the track is different from the tracks in the States and Slade was struggling to find a rhythm, something  Lewis has been working on at home with him.

The snow didn’t help either you don’t get a lot in Florida. He qualified third, and in the two Saturday races had two third place finishes, which left him one point off the overall lead on Saturday night.

Sunday morning saw bright sunshine melt the snow and with the sun on his back Slade led all but one lap of race three for his first moto win.

Race four saw Slade running second but starting to feel the hard work he was having to put in fighting the track. He lost second at half distance but dug deep to fight back and regain the place and the overall lead going in to the last moto

In the last race second would give us the overall, and by lap two we were leading it showing the speed is good ,but Slade was unable to maintain it and slipped back to second and then slipped back within reach of third place and coming together on the last lap fractured  the back brake hose and Slade finished third .

Second overall on the day one point off of first but the American takes the championship lead.

Slade Tressler: “Yea wasn’t a bad weekend overall, I struggled a bit with the track as I don’t have tracks like that in florida. I ended up second overall for the weekend but I can take some positives out of it. I got my first moto win and came out the points leader as of now. Wanna say a big thanks to bob and GL12 for helping me out and also my other sponsors like 6D, 100%, O’neal,gaerne,rtmx, putoline and everyone else that helps me.”

Talented Irish rider, Cameron Turley has never rode the track before so he needed to quickly adjust to the conditions during qualification. He was able to put a solid lap in to qualify in thirteenth which gave him a solid gate pick for the five moto’s over the course of the two days racing.

Unfortunately Cameron had mechanic problems during the first moto and had to ride his practice bike for the rest of the event. However, he did have two good moto’s, a tenth place during the second moto against the tuned bikes was encouraging and showed that he had good speed.

He finally got a good start and was able to confirm that he had the pace to run with the guys at the front, a fantastic third place finish. Unfortunately, more mechanical problems cost him good results on the day but a twelfth overall with all the bad luck is a good result and shows he could easily finish in the top five!

Cameron Turley: “I went into qualifying not knowing the track so I didn’t really get in a fast lap and qualified in 13th. In race one I had mechanical issues which meant a DNF.  In race 2 I had to ride my practice bike which was tough against tuned bikes, I came through the pack to 10th.

Day 2 we put a pipe and freshened up the practice bike a bit, thanks to planet suspension for the help getting it sorted. Then went into the first race that day getting a good start and making a few passes for 3rd. During Race two I had more mechanical issues so rode round for points. In race three I suffered a bad start and was in a pile up so didn’t get going for a while but i worked my way up to 13th.

I am happy with my fitness, thanks to Philip Caldwell and Philip McCullough for the gym work and also happy with my speed, just need a bit of luck. I’d like to thank htm off-road, five5motorsport, belray, acerbis, husqvarna, pronet safety services, planet suspension, I love bass and all the other people behind me that I may have missed out for all the help! Special thanks to my mum and dad for also pushing me on. Looking forward to the rest of the 2016 season.”

Find out full results from the event here.