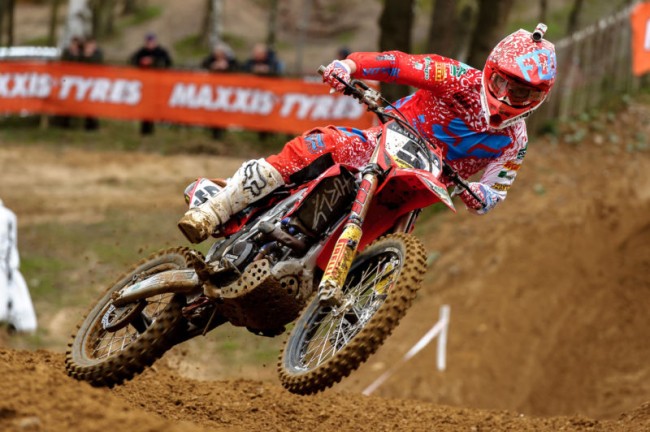 Buildbase Honda Racing put two riders on the podium at the second round of the Maxxis British Motocross Championship supported by Pro Clean at Canada Heights on Sunday.

Irish racers Graeme Irwin in MX1 and Martin Barr in MX2 both ended the day on the third step of the box after solid performances around the demanding Kentish track but crashes proved to be expensive for Kristian Whatley (MX1) and Lewis Trickett (MX2).

Heading into round two tied for fourth in the championship, Graeme strung together solid 3-5 finishes on his CRF450F to move up to third in the title standings.

“It’s not been a bad day but because of Tommy Searle’s mistake in the first race I should have capitalised on that and been second overall,” said Graeme. “To be fair this track has never been one of my best ones so to get a podium with the depth of this field I’m happy and it’s been a good day – I feel I’ve used my head

“I had really good speed in the first one and I was just unlucky not to get past Tanel Leok. I felt I had the speed to run with Shaun [Simpson] in the first race, not so much the second one when I struggled a little bit. I got a bad start and came through to fifth and then I was kind of on my own – I knew I was on the podium and didn’t want to have any mistakes because the track was quite sketchy.”

Former champion Kristian Whatley carded fourth in the opener but a crash at the start of race two meant he was forced to come back from last to eighth in an epic comeback to secure fifth overall and advance to fifth in the points table.

“I qualified third which I was quite happy with,” said Kristian. “First race I had the holeshot and rode my own race for maybe the first quarter before Simpson passed me. I tried to stay with him but made a few mistakes – halfway through I started gaining on him but I got a little arm-pump towards the end and the backmarkers played a bit of a game and Leok and Irwin got past me.

“The second race I got an okay start but in a tight right-hander I was pushed over the berm and went back to pretty much last but came back through to eighth. It was an all right day and I moved up in the points.”

Martin went into Canada Heights as a strong favourite but after a solid race one result a stall on his CRF250F in race two proved expensive. However, his 2-4 card earned him third overall and moved him to third in the championship, just one point from the series lead.

“The first race I didn’t make such a good start and I had to come through the pack,” he said. “Me and Steven Clarke passed each other a couple of times but I made a mistake halfway through and he got away a little bit. I wasn’t too disappointed with the first race – I felt I was riding really good.

“I was really up for race two. I didn’t make such a good start but I had a good first lap, started picking them off and eventually got into second. The last part of the race I began closing down on Clarkey but with three laps to go I had a big push on, went into a corner and lost the front end and stalled. It was very frustrating and it cost me.

“I should have been leading with the red plate but it’s not one of my favourite tracks and it’s still a long season with all to play for and Hawkstone Park’s next followed by my home race at Desertmartin and I’m really looking forward to the next couple of races.”

Lewis Trickett, the team’s second MX2 rider, suffered from crashes both times and was disappointed with his overall score.

“It was bad,” he said. “This morning I was a couple of seconds off in qualifying which I didn’t think would be the end of the world but the track was flat and everyone was so close and it put me down the order a lot. It made life a little bit difficult for myself.

“I actually made really good starts in both races. In the first race Lewis Tombs had a moment in front of me and we both went down and I ripped all my clutch perch apart. Race two I thought I should have made the holeshot up the inside but I backed off too early, got caught up and ended up on the floor. It was a really tough day.”

Team boss Dave Thorpe was keen to take the positives from the event.

“Martin rode really well,” said the three-time world champion. “In the first race he caught his arm early on and it took him a while to settle down. In the second race he rode impeccably but unfortunately just made a little mistake and the bike took an age to start. He rode exceptionally well – he was just unlucky with that little blip that probably cost him the overall and the red plate.

“The first MX1 race the boys started really well. Kristian started to close on Shaun Simpson with four laps to go and then he just hit a bit of a wall and got absorbed by Tanel [Leok] and Graeme.

“Second race Kristian started well and five corners in he was taken down and went back to 25th and rode very, very well to get back to eighth.

“Graeme didn’t really get going – he started fifth and that’s where he finished. Don’t get me wrong, fifth isn’t a bad result at the Maxxis but I think he would probably have been expecting a little bit more.

“We’ve got six rounds to go and we’re still in it.”