Buildbase Honda return to Arenacross for 2016! 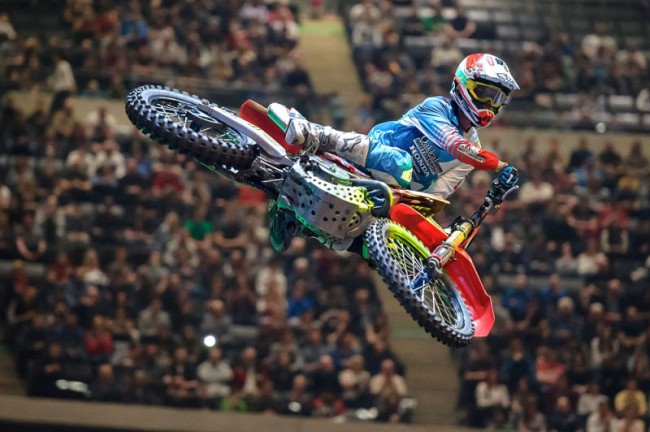 Buildbase Honda have returned to the Monster Energy Arenacross Tour with arguably one of the strongest teams as the 2016 tour kicks off in the Manchester Arena on January 2nd.

The team, owned by former triple world champion Dave Thorpe, took a year out of indoor competition in 2015 but soon realised that with the tours huge publicity wheel together with an unmatched number of spectators, the officially supported Honda team just can’t afford to miss out on the growing success of Europe’s fastest growing indoor series.

“Arenacross has developed at such a fast rate that we feel both Honda & our partners Buildbase would be missing out on something very big if we didn’t compete” explained Thorpe. “We’ve now put together what we believe to be an immensely strong team that has every chance of winning – we’re there to race and we’re there to win.”

Thorpe’s Buildbase Honda team were quick to sign up 2013 Arenacross champ, Adam Chatfield to run alongside 2015 runner-up, Italy’s super-talented Angello Pellegrini to compete on the latest Buildbase spec Honda CRF450’s. Pellegrini, fresh from winning the final round of the 2016 tour at Wembley after inheriting the lead in the final Main Event of the season following an unfortunate puncture from Chatfield, is all set to return to the UK. “The series really is amazing – the atmosphere, the show, the racing, the FMX makes the UK a great place to start the new year and I’m super-happy to be part of Dave Thorpe’s team. Its professional and the people are great” Pellegrini continued.

Arguably the UK’s finest ever indoor specialist, Brazil based Chatfield was also quick to comment; “I’ve ridden with Dave before and in that year we took the title. We had a few injury problems in the past few years, but I now feel we have the package to go and win races – I’m here to win it for the UK”.