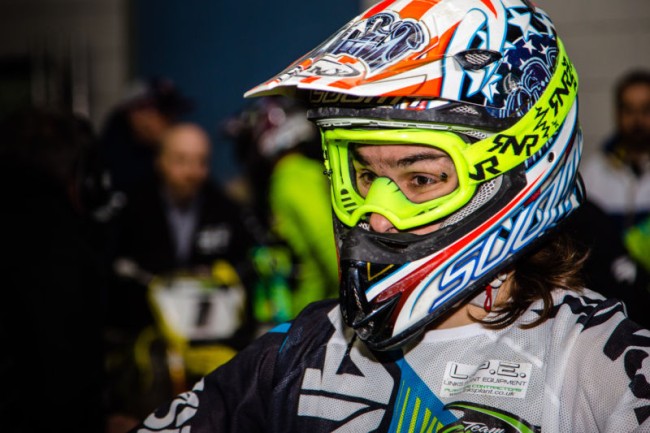 Buildbase Honda has confirmed it will return to contest the Arenacross Tour in 2017 with a completely new line-up of experienced Pro and Pro Lite riders, and a single-minded focus on once again lifting the AX Pro title.

The Pro team will comprise of the 2014 AX Pro champ and multi-French supercross champion Fabien Izoird, together with the second-placed Brit of the 2016 series Matt Bayliss. Chris, the younger of the Bayliss brothers, will join the team as an endorsed rider in the all-new under 23-years Pro Lites 250 group.

Izoird is now an official Honda Europe rider and the fact that he is heading up the Japanese marque’s team in the UK Arenacross Tour is an acknowledgement of the importance the unparalleled series holds in the eyes of the big players. The engaging Frenchman was leading the 2016 championship by three points after round six of the double-header at the Genting Arena, Birmingham and looked a safe bet to extend that lead and secure the overall. His championship charge was cruelly brought to an abrupt halt though during the following day’s incident-packed round seven – quoted by many riders as a case of survival of the fittest – when he was involved in a mid-pack crash which resulted in him breaking his leg. A crumb of consolation was that he continued to lead the 2016 series, however, sadly for Izoird, it was short lived. That the former AX champ has the support of such a high-profile team and of course, the great Dave Thorpe, is testament to the belief that he is in with a very real chance of again lifting the AX crown, and there’s little doubt that he’ll be firing on all cylinders when AX 2017 gets underway in Manchester next January.

Joining the Buildbase Honda team will be a massive boost to the Bayliss brothers, who both previously contested Arenacross as a family-backed privateer team with dad Dave as team-manager and support from Wooldridge Demolition, a valuable partnership that will continue with the new 2017 set-up. Twenty-two-year-old Matt sprung what was possibly the biggest surprise of the 2016 Tour in the opening round heats at Manchester when he shot off the start-line, grabbed the holeshot and literally threw his bike into the first turn. He was on fire as he scorched around the track and the whole arena, wound up by DJ BBQ, was with him. He valiantly fended off a late attack from soon-to-be-teammate Izoird on the final lap, and the crowd roared in appreciation as he flew across the finish line. That was the first of many ‘Bayliss moments’, and the refreshingly down-to-earth carpenter went on to finish a creditable sixth overall in 2016.

Said Dave Thorpe; “The UK Arenacross series is a firm early-season fixture on our calendar and we’re delighted to again play an integral role. To have a rider as experienced as Fabien on our books as not only a factory-supported Honda Europe rider, but also an Arenacross specialist and former champion, is a boost to the team and sport in general. He’s determined to put Buildbase Honda on the podium each week and I believe he has the hunger and skill set to do so. Another new dimension to the team is that Graham Wooldridge, who has played a major part in helping the Bayliss boys with their racing prowess, will join us. I’m particularly looking forward to working with him, as well as Matt and Chris who are young, keen, talented and exciting. I’m convinced that by working together we can help them reach their full potential.

“AX is also an important platform for Honda, as a manufacturer, to showcase its latest machinery in a tough, fast-paced and unforgiving environment. Both Fabien and Matt will showcase the incredible 2017 CRF450R whilst Chris will be on the CRF250R – we’re now on countdown to the 7th of January 2017 when we get out on track at Manchester.”

Commenting on the latest AX team news, e22 boss Matt Bates said; “It’s fantastic news that both Buildbase and Honda UK will be returning to support the series again in 2017. It’s equally exciting to see our 2014 AX champ, Fabien Izoird, ride for a new team where it’s not doubted that he has every strength to yet again fight for the series win. Matt Bayliss was also a stand-out rider for the series last year, and even better that he’s British – he deserves this ride more than any other rider on the track and I can’t wait to see him line up for round one in Manchester in January.

Check out www.arenacrossuk.com for the latest AX news and to buy tickets.