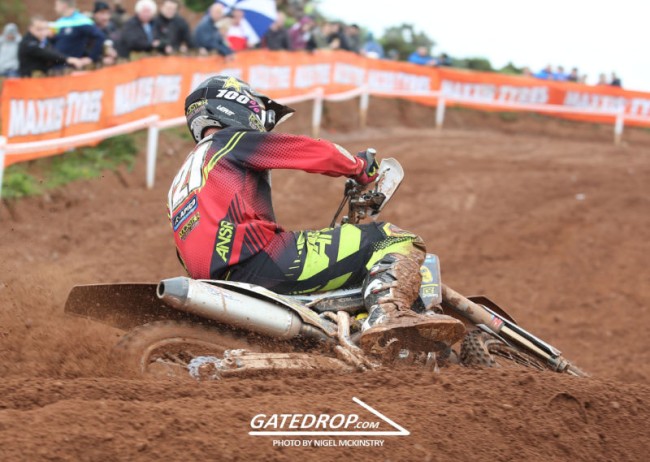 Seems like Bryan Mackenzie has been around forever, this year the Edinburgh based rider is sitting nicely in second place of the Maxxis British MX2 Championship and now heads to round 5 in Scotland on July 3 – back home and wanting to shine in front of his home fans.

How cool is it to have the Maxxis British Championship back in Scotland?

“It’s totally badass to have the biggest national series in the country coming back to Scotland finally. It’s been missing for a long time now and long overdue. The novelty of racing an hour from home and being in my own bed on Saturday night not living out of my camper for the whole weekend excites me too, that’s only ever happened a few times before. So I’m hoping it helps me feel extra comfortable for the day.”

How important is it for the championship to cover the whole country and not just down south?

“I think it’s only right that the British Championship covers the whole of the UK. I mean, I don’t mind travelling to England, Ireland or Wales every weekend because that’s what’s part of the prestige of the Maxxis British Championship. Races aside though It’s going to be nice to race in front of a lot of people that usually might only get to follow our season online or in the media and it’s going to give them a chance to see us at work in person. I think that’s what’s great about it coming back – the Scottish motocross community getting to see the best racers in the UK for real and it just so happens that this year our small community has a guy to pull for at the pointy end of each championship to get them extra amped.”

For you as a rider, how many miles do you travel per year racing?

“My racing season is a long one because our travel schedule means we need to leave most of the time in the wee, wee hours of Saturday morning and don’t then get home until the same time Monday morning – we have done 11,000 miles in our Apico Husqvarna VW crafter since February already and that’s just going riding and racing on the weekends. So the travel is a total drain on me financially and physically but Leuchars is only 50 miles from my door and even closer to my mechanic’s workshop. That’s rad.”

Your season has been impressive, currently second in the British MX2 championship, the bike and the team seems to be working for you?

“Yeah my season is going real well. I love my bike right now. BC (from Leven, Fife) has built an amazing bike and it hauls ass. I had a slow start in the championship which has hurt my points total a little but since then I’ve been feeling it. The bike is good, the health is good and the Apico Husqvarna team as a whole are mega. We get on really well. Richy C, his wife Chris and chief team tech Stuey Summers are really easy to ride for, There’s no stress. They’ve gave us great tools and weaponry to allow us to be 1-2 in the MX2 championship. They trust me to do my thing up here and I’ll always keep preparing properly as I have done for so long so we don’t even speak that much in the week because I know those guys lead important busy lives and I don’t want to bother them. we all know our job within the team and want the same end goal and we’re all working towards that playing out our part in achieving it. It’s works.”

Do you see yourself racing the 250 class for the rest of your career?

“I like MX2 bikes. They just suit my style. The younger guys won’t know but I rode MX1 from when I was 18 years-old until I was 25 and the first time I ever rode a 250f was 2010. I used to run inside the top-8 of MX1 every week at the Maxxis and raced a load of MxGP’s but I used to get hurt, a lot. I’m a slim build kinda guy along with some irreversible injuries and it makes riding a 450 in anger pretty dangerous. I just like 250’s, and my riding style is way more suited to them and I’m too old now to start messing about trying to adapt to make it fit a 450. So, I guess I will be 250f until I hang the boots up.”

Your perfect season would be?

“My perfect season is to win. It would be amazing to win at this home round at Leuchars in front of all my friends and Scottish supporters and then make a solid run at the championship. To achieve either or both of those would mark this year as one of the greatest ever and add my little baby girl due in September too which I’m pumped to death with, That would make 2016 pretty perfect.”

Fave city?
“Edinburgh. It’s home and I really do like it.”
Food?
“My Granny-in-law is an unbelievable cook. She sends care packages over almost every week and it blows my mind. Old-school home cooking is the nuts. Or chocolate, it’s a toss up.
TV show? Suits – it’s Totally BA.”
Film?
“I like all the comic movie stuff – Spider-Man, avengers, iron man, transformers etc”
Did you ever complete the rubik’s cube?
“Pfft, not a chance. I am self taught at photoshop, illustrator, Autocad, making websites etc tech is my kinda stuff.”