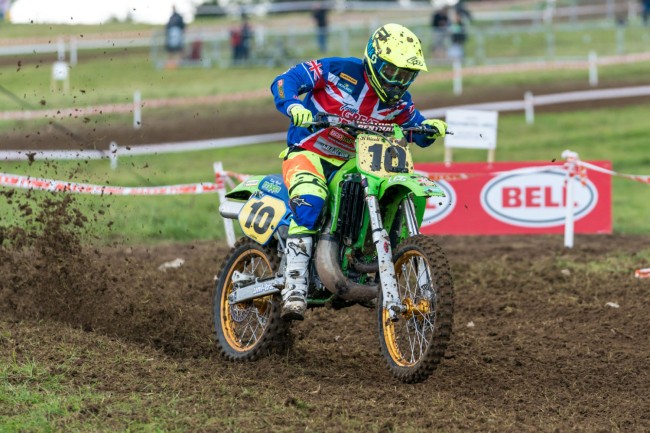 British teams swept to victory in both blue riband classes of the Vets Nations at Fareigh Castle, winning the twin-shock and Evo classes, against tough international competition from the USA in the world’s biggest retro motocross festival.

With over 600 riders competing on the famous and historic Farleigh Castle circuit, thousands of spectators saw close racing in all the classes over two days that were hit by heavy rain overnight. Only lots of work on Sunday morning made the wet track ridable, and it dried up well.

The highlight was the Evo Nations battle which saw current and former GP and AMA pro riders go head-to-head on bikes that officially should have been made before 1989. Although Mike Brown’s Husky clearly flouted the rules at it had a very modern front end on it!

But it was Team England that ran away with the Evo Nations victory, as Kurt Nicoll, Mark Eastwood, Tom Church and Brian Wheeler took the win from their American rivals of Mike Brown, John Dowd, Doug Dubach and Todd De Hoop.

Dubach was not on top form, nursing a dislocated shoulder and broken ribs from a recent crash. He also rode three different bikes as he had various mechanical issues.

Third was team Belgium who edged out South Africa for the final podium spot despite South African Nev Bradshaw making a clean sweep of all four motos after fighting off challenges from Brown. Recently retired pro Bradshaw will also represent South Africa in the Motocross of Nations in the UK in two weeks.

And in the Twin-shock Nations, team Twinshock UK’s Alex Rach, Rick Du-Feu, Terry House and Wayne Butt took the win from the North of England and Luxembourg teams.

John Down trying to control the power of the KX500 Pic: Adam Duckworth

In the individual Evo classes, EMX300 champion Brad Anderson romped to victory on a Honda CR500 in the 500 class. And in a fitting homage to the late Hakan Carlqvist, he had such a huge lead he stopped for a beer on the penultimate lap! He struggled to kick the CR back into life but still won with ease.

And former British champion Kristian Whatley won all four 125 races in his first ride back since breaking his femur. He was only given the go-ahead to ride by the doctor a few days before the event, and seized his 1989 Mugen CR125 Honda and bent its swingarm in a pre-race shakedown. But he was in top form come race day.

Nicoll was in winning ways in the Over-50 Evo class, taking a KX500 to the win over long-time rival Doug Dubach. While John Down piloted a Maico to the Over-50 Twin-shock win. But it was a disastrous weekend for Jeff Emig, who had bike problems and crashes and failed to finish a moto. But he was loved by the spectators, as was Doug Henry who made a guest appearance alongside Dakar winner Sam Sunderland who couldn’t race as he had bike problems.

And even US 250 champion Zach Osborne turned up to spectate, alongside former world champion Graham Noyce. Former GP star Mervyn Anstie raced and had lots of fun with 10th overall in the Twinshock Nations races and 24th in the Evo 500s, while his son Max was in France finishing on the MXGP podium.