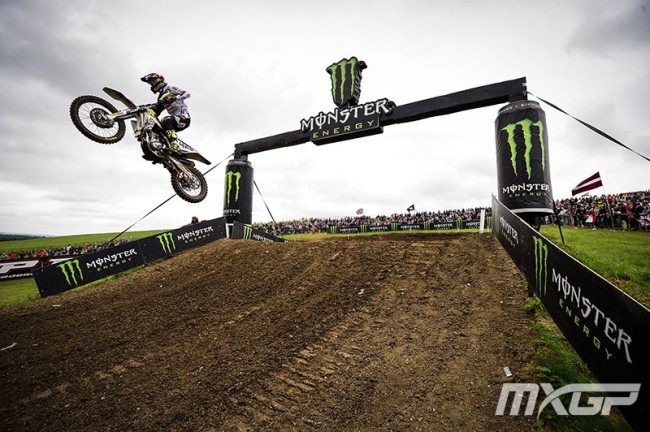 It’s hard to believe that Matterley Basin hosted the eleventh round of the MXGP world championship, this season is going so fast! It’s crazy that there are only seven rounds left. We will take a look at the riders that impressed during the course of the weekend in the MX2 and MXGP World Championships.

After Saturday’s performance I wasn’t sure that Jeffrey Herlings would get it all on his way on race day. However, he got two brilliant starts and proved why he’s one of the fastest, if not the fastest rider in the world. Matterley Basin is a track Jeffrey tends to struggle and Valentin Guillod beat him to the overall in 2015. However, this weekend no one was a match for Jeffrey and he dominated the MX2 class. He crossed the line with a twenty-one and twenty-two seconds margin in both the moto’s which is impressive at one of his worst tracks on the calendar. Jeffrey now has an amazing fifty-eight GP wins next to his name.

It was a good weekend for KTM as they had plenty of MX2 success. Pauls Jonass joined his team mate on the podium as he finished third overall. He won’t be happy about Seewer passing him on the last lap in the first moto but he showed good speed, he was only able to gain two points on Seewer in the championship chase for second but we are heading into sand GP’s were Jonass should be strong.

What a weekend it was for Conrad Mewse in front of his home crowd. In the first moto he got a brilliant start in third and he really did show what he can do with a good start. For the first fifteen minutes he looked really comfortable and was right behind Herlings, getting a bit of a riding lesson but there is no doubt he would have learnt a lot from the former World Champion. Later in the moto he stalled it but he is a rookie after all and will make rookie mistakes, a fifth in moto one was a tremendous result. In the second moto he crossed the line in ninth for seventh overall. This year is all about learning for next year and if he keeps up this speed the British fans can be very excited for the 2017 season. Conrad Mewse is the real deal.

One rider going under the radar in the MX2 class but who has improved significantly this year is Spaniard, Iker Larranaga. Iker has made the step up from the EMX250 class and he is improving by riding with the best 250 riders in the world every week. He ended up tenth and eleventh in the moto’s to give him ninth overall, his career best MX2 result.

A shout out to Karlis Sabulis who stepped into the Kemea Yamaha awning for the injured Brent Vandoninck and ended up eleventh overall, a good start to life in the MX2 class. Nicholas Lapucci and James Dunn also deserve mentions for finishing in fourteenth and eighteenth overall respectively.

There is no doubt that Tim Gajser is getting stronger and stronger each and every GP. At the start of the season he was making some mistakes and getting away with them but he is adapting to the bigger bike more and more every GP. The other riders struggle to match Gajser’s intensity and the only rider capable of beating him sadly got injured. Tim now has a seventy-four points lead in the championship race and with Febvre being ruled out that is set to increase this weekend after Mantova. Tim has one hand on the title and HRC Honda are close to getting the title they so desperately want and have invested millions into. All Tim has to do now is be consistent and not do anything silly, he still has a 100% podium success rate which is incredible! Will he be able to podium every single GP during the 2016 season? Never say never.

MXGP rookie, Valentin Guillod had his best GP of the year finishing fifth overall. He had an impressive first moto in second place but then Cairoli made the move on him in the last lap but third is still a good result for the Swiss rider. In the second moto he was in seventh and looking to move forward but then unfortunately crashed. He was able to come back to seventh place again when he crossed the chequered flag. He was only two points off the podium and without that crash it probably would have happened. An encouraging weekend for Guillod but we shouldn’t be surprised as he won the MX2 class at Matterley Basin in 2015.

Tim Gajser wasn’t the only Honda on the podium as Gautier Paulin joined him on the third step of the podium.  The French man had two pretty lonely riders, in the first moto he was fifth for the entire race and was under pressure from Van Horebeek but he was able to hold on for a solid fifth. He had a much better start in the second moto and he took advantage of it crossing the line in third place for third overall. A good result for Paulin but he still doesn’t look to be back to 100% so there should be plenty more to come from him.