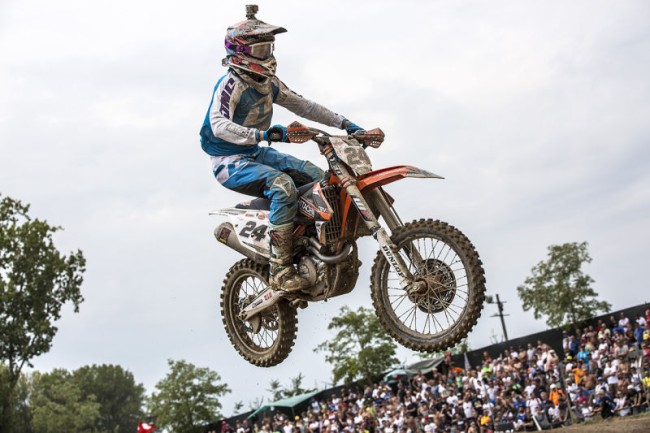 After a successful meeting with RHL Activities Mr. Gareth Hockey and Mrs. Margaret Steven the Maxxis British Motocross Championship will return to Scotland for round five of the 2016 championship. The event will take place at the circuit of Leuchars in the North East of Scotland on July 3rd, which will be followed by the British Youth National that will take place at the same track and location the weekend after on July 10th. As a whole, these events taking place back-to-back is a dream for British motocross as the youth can watch the ‘big-boys’ of the premier series race around the same track they will be racing on the following weekend.

“It’s been quite a while since RHL Activities has promoted a Maxxis British Motocross Championship, the last time being at Pontrilas in 2007.” explained Gareth Hockey. “The team are really looking forward to working with Glenrothes MSC at the fantastic venue of Leuchars. It’s going to be an incredible race weekend as British MX1 champion and new RHL team member Shaun Simpson who lives local to the venue will be one of many world class riders racing that weekend.”

In addition, Leuchars is home to British Motocross MX1 Champion Shaun Simpson who we recently spoke to, “Leuchars is about 10 mins from where I live so it’s one of the tracks that I grew up on, I did a lot of the laps of my school boy career around there and I had my first ever School boy British championship win there in 2001” Simpson said.

“It’s been a long time coming” the champ continued, “I am really positive that The Maxxis have decided to come up north of the border and give it a proper go again and I think Leuchars is the place to do it at as it is central and it is the centre of motocross in Scotland. It’s just a good location, there is good access to it from Edinburgh, Glasgow, Aberdeen, you know those sort of main cities and there is quite a big community there, so for me it is absolutely great so all my family and all my friends who normally have to travel so far to actually watch me, like any trip is at least 5hrs to come and see me in the UK normally, so having a round in Scotland is absolutely excellent for Scottish riders and for Scottish fans in general.”

The ACU Events Championship Manager Mr. Stuart Drummond said “Shaun’s input is valuable to us, as is his enthusiasm about the event. He is always encouraging and positive about the prospect of returning to Scotland and what it can do for motocross in general. I look forward to working with him and the RHL Team, it’s always nice to involve the riders and especially one of his calibre.”

In terms of the track Shaun said, “I should probably steer away from talking about the current track because I think they are going to go in there and revamp it which is really exciting because I think it has potential to be an amazing venue. It’s black sand, which is cool but it’s just tired right now because it has not had any proper work done to it for a good number of years and you know if they come in and sort it out, then we are looking at possibly one of the best British Motocross Championship events that we could have.”

Mr. Drummond agreed, “I do believe in the venue and like Shaun said, I think it has a lot of potential to be a fantastic meeting and we will be working with the promoters, RHL Activities, to get the track up to scratch and put it to the standard we require.”

Something that will make Leuchars something special is the fact that it is a new track and venue for the Maxxis British Motocross Championship, Shaun conceded “I am definitely a believer of changing tracks up, you know riders like to come and ride something different and it’s like a new venue and no one would have ridden there. It will totally revive the track especially if they can bring the sand that has been pushed out back in and get rid of the holes that have been filled with water. They could add some more technicality, waves and nice jumps. It doesn’t need anything too technical added to it because the way the sand is, it will just become technical anyway.” Mr. Drummond agreed and this is something that will be worked on.

Shaun finished up in saying, “With the Maxxis British Championship coming up and preparing one of the best tracks in Scotland, it is great, it has been great in the past, at least from memory in my career anyway and I think doing that will definitely revive Scottish motocross and I can’t wait to head home and promote the event and pump up the Scottish round of the British Motocross Championship and get everyone buzzing and excited to come back year after year. If they do it well it should be a permanent fixture on the British calendar.”

With Shaun adding a lot of positivity to the campaign, both the ACU Event’s and RHL Activities are excited to head back to Scotland next year and make the fifth round of the 2016 Maxxis British Motocross Championship one to remember.
– See more at: http://www.mxgb.co.uk/article.php?id=912#sthash.b2tNffgX.mjZGgTu7.dpuf