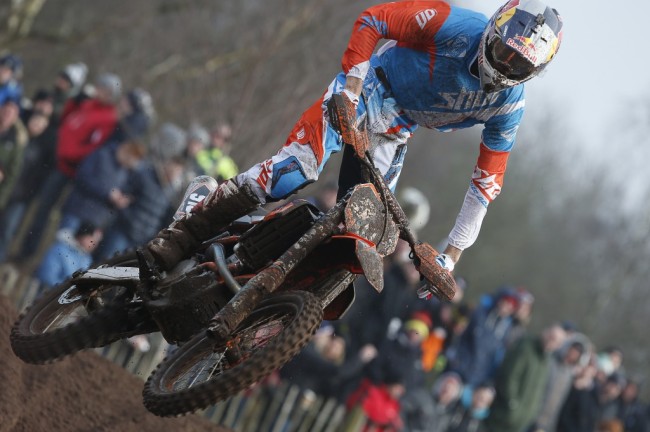 It was a bad start to the day when the first MX2 race had to be red-flagged after a horror injury for Mel Pocock. The British title hopeful on the Dixon Kawasaki had to be worryingly air-lifted to hospital after losing his thumb and part of his index finger in what was a gruesome injury at the beginning of the race. Pocock is in a very bad way and we wish him the best, motocross can be so cruel at times.

It meant no riders for Steven Dixon’s Kawasaki team with Anstie already missing through injury and also missing was Hitachi KTM UK man Petar Petrov who is nursing a dislocated shoulder.

But when the racing did get going at the second attempt, it was the fastest qualifier young Ben Watson who won his first ever British championship race after a ding-dong battle with his career-long rival Adam Sterry. The two teenagers beat Frenchman Steven Lenoir by 33 seconds! Good rides too for Steven Clarke and Bryan Mackenzie to round out the top five.

In race two Sterry got into the lead but got a stone caught in his chain and that resulted in a costly DNF. Sterry was left to rue what might have been as Ben Watson passed Lenoir for the lead. Watson slowly extended the gap to win again and do the double on the day! The Hitachi KTM man will take the red plate to round two and leads the championship for the first time ever.

Watson and Lenoir were two seconds quicker than their rivals in race two but Watson has the momentum in this championship. Lenoir is positioned well too after an impressive day in the sand for second overall while Bryan Mackenzie showed age is no barrier for desire with brilliant third in the second moto to claim the final podium spot.

In the first MX1 race Shaun Simpson cruised to a 27 second victory on the sandy circuit over a fast MBO Yamaha’s Brad Anderson and a rejuvenated Martin Barr on the 350 KTM.  Sand specialist Gert Krestinov was a good fourth and Tanel Leok made his return to the British series in fifth. Title contender Steven Frossard had a bad start to his campaign after going down in a pile up in turn one and scored no points.

It was another double for the Hitachi KTM UK squad as Shaun Simpson ran down early leader Kristian Whately. The Scot held off a last minute dash from Tanel Leok who finished second (and also second overall) with Whatley finally finishing third on the Buildbase Honda. Gert Krestinov and Brad Anderson rounded out the top five, giving Brad third overall on the day.

But it was Simpson’s day and the defending British Champion has started the season with a bang -he already looks like he could to be hard to beat!