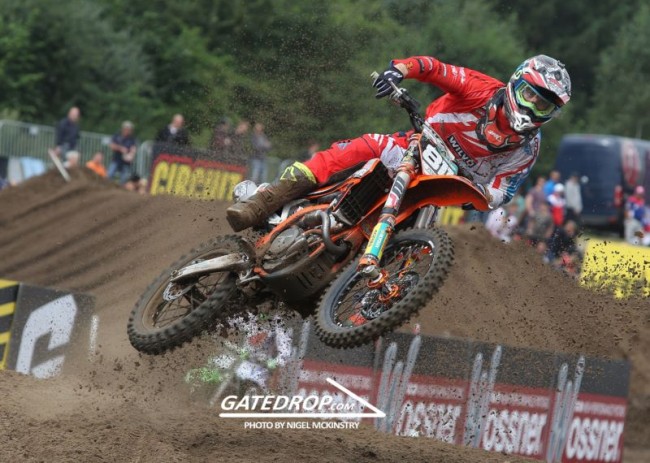 It was a great day for Adam Sterry at the seventh round of the British championship. It was his return to racing after his injury at Lommel ruled him out of the last few GP’s but he was back with a bang today. He came into this weekend seven points behind Steven Clarke in the championship race. He gained eight points on Scuba and now leads the championship by one point – it’s going down to the wire!

It was nice to see Mel Pocock put a good ride in on his Hitachi KTM finishing the first moto in third and ending up fifth overall.

It was a great day for Steve Turner as Simpson also won both the MX1 moto’s. Four wins from four for STR KTM, it doesn’t get much better than that. Tommy Searle ended up second overall to hold onto the red plate heading into the last round.  Jake Nicholls rounded off the podium as the GP riders went 1-2-3.

Graeme Irwin who is riding with a broken thumb rode well under the circumstances for sixth overall. Belgian wild card rider, Jeffrey Dewulf had a disastrous first moto but finished third in the second moto. Stuart Edmonds had a solid day with two consistent results and ended up ninth overall.