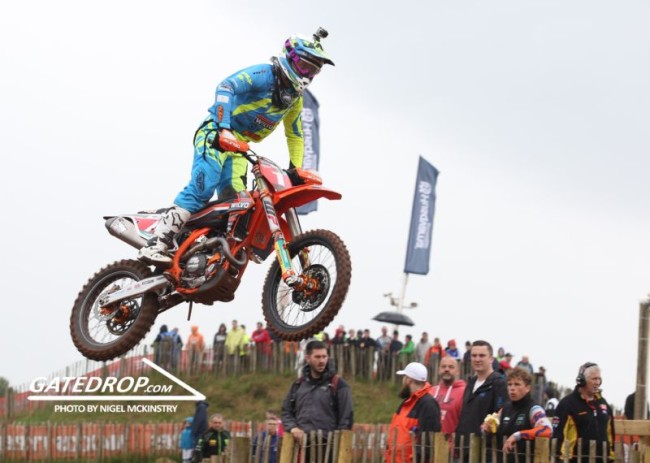 Round five of the Maxxis ACU British Motocross Championship supported by Pro Clean will head to the new venue of Leuchars, Fife, in Scotland this weekend, July 3rd, and all eyes will be on the Wilvo Virus Performance KTM rider Shaun Simpson who will be performing in front of his home fans.

Simpson’s family home is less than ten miles from the venue, and even though he now spends most of his time in Belgium, it’s a circuit that he grew up racing on, so it will quite literally be a home advantage as he looks to defend his 21-point lead over Monster Energy DRT Kawasaki’s Tommy Searle as the series enters the second half of the campaign.

Despite Simpson’s lead it’s been a difficult season for the tough Scot, a hand injury in Spain one month ago has seen him struggle through the past couple of world championship rounds, missing Italy last time out, one week before heading to Leuchars. However, Shaun is upbeat and is looking forward to coming home:

‘The hand is doing great; it was great to have the weekend off instead of racing in Italy in order to get my hand fixed. It was the first GP I have missed in seven years which wasn’t nice at all but I was fighting every week to try and ride again with the hand and after only having four or five days in between GP’s to recover it wasn’t doing it any good. But, I have noticed a big improvement this week in the way that the hand is feeling, I almost don’t feel the symptoms anymore and I would say that it’s getting close to fully healed now which is great.
‘I will ride on Friday before I make the jouney to Leuchars just to see how it’s feeling but I’m sure I will be able to ride a lot better than I did at Desertmartin or Matterley Basin so I should be up towards the sharp end, challenging to be in the top two or three positions. I would like to win at my home round obviously but the main goal is the championship.’

As Simpson fights his own battles the rider closest to him in points is Searle who would love to put one over his rival on home soil in a bid to regain lost points from his DNF in the first race at Desertmartin, but you can bet he will be hungrier than ever as he continues to chase his first senior championship title.

Third in points and starting to make his presence felt is Hitachi Revo Husqvarna’s Jake Nicholls who is now just 18 points behind Searle, has six top-three race finishes and took the overall win last time out at Desertmartin with a 1-3 performance on the day. Jake’s home race at Blaxhall Circuit will follow Leuchars on the calendar and so another good performance in Scotland will be perfect timing for the Suffolk based rider.

Former MX1 British Champion Kristian Whatley has only taken one top-three race-finish this season and heads to Scotland in fourth place just one point clear of his Buildbase Honda teammate Graeme Irwin who was unlucky last time out at his home round in Northern Ireland. The Buildbase Honda rider fell whilst leading the first race and could not rejoin after breaking his handlebars as a result, so he will be another rider looking to make amends at Leuchars.
Of course you can never rule out strong performances from the likes of MVR-D 10K Fuel’s Tanel Leok, Verde Sport KTM’s Brad Anderson or the Phoenix Tools Honda of Gert Krestinov, three riders who could be real spoilers on Sunday.

In MX2 Apico Husqvrna’s Steven Clarke will arrive in Scotland with the championship leaders Red Plate after a solid performance at Round 4 and while he will be keen to gain more ground on his rivals he will most certainly have to cast an eye over his shoulder, as his closest rival comes in the form of his Apico Husqvarna teammate Bryan MacKenzie. The rider who resides close to Edinburgh will relish performing in front of his home fans and with five top-three finishes already, he will certainly be on fire and a firm favourite with the fans.

Martin Barr, who led the series going into Round 4 heads to Leuchars twenty-points adrift after crashing out of his home round, damaging the ligament and the muscle at the back of his shoulder, but according to Buildbase Honda’s Team Manager David Thorpe, his MX2 pilot should be almost back to full strength on Sunday:
‘He raced last weekend and got a second and a first which was far better than we anticipated; he was about 65% last Sunday and so however bad he felt last week he should be around 85% by the weekend’ said the former three-time world champion.

However, the rider that the top three will fear the most is Wilvo Virus Performance KTM’s Adam Sterry. The Welshman stormed the Desert’ last time out to take his first two wins of the season and now sits fourth, just twenty-eight points off the lead.

MXY2
After four rounds of action the MXY2 kids will be at it again on Sunday with James Carpenter sitting pretty at the top the championship table on his Holeshot Motocross KTM. Last time out he took stole the show, collecting his second overall victory of the season along with his third moto win of the year. He was a double-race winner at Desertmartin.

Henry Williams lies in second but the RFX KTM rider cannot afford to slip up on Sunday as the P & H Motorcycles KTM of Michael Ellis is just six points further back in third.
Husqvarana UK’s Dexter Douglas occupies fourth but is only two points clear of George Grigg-Pettitt’s Carl Nunn KTM.

Whitburn’s finest Alexander Brown currently sits in sixth and will be making a return to the series on Sunday. The West Lothian rider won three of the first four moto’s of the championship earlier in the season but a crash left him sidelined for Hawkstone and Desertmartin. Will he be a hometown hero this Sunday on his Apico Husqvarna?