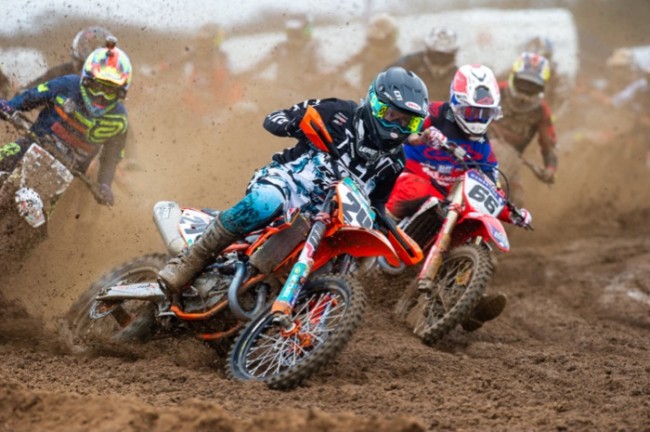 Tommy Searle leads the MX1 class by just six points over long-term rival Shaun Simpson as they head into round five of the British championship at Desertmartin.

Searle has been in good form this season and shown top ten GP speed when he gets the starts and has been very consistent in the British championship, winning three motos and not being outside the top three all season.

Simpson of course is no stranger to racing across the the Irish Sea, having raced in several Ulster championship races as a teenager in the mid 2000s, but now Simpson comes back as a Grand Prix veteran with a ton of experience. However, he is unfortunately coming into Desertmartin nursing a broken hand after clipping a fence post at the previous round at Blaxhall a month ago.

It remains to be seen how fit and close to 100% Simpson is but this is a track he should excel at, although Searle proved last year he knows the fast way around Desertmartin as well!

A man who has went to the next level this year is Jake Millward, who won his first ever moto at Blaxhall last time out and has shown some tremendous raw speed in 2019, keep an eye on him this weekend!

Gert Krestinov always goes well at Desertmartin, Mel Pocock has been training with team Irwin this week and usually goes well around Desertmartin, as does the hard charging Brad Anderson and Lewis Tombs. Tombs, who once rode for Jonathan Rea’s JAR Honda squad, is now riding for Buildbase Honda and has shown some of the best form of his career this season.

Then you have the local men. Stuart Edmonds had a tough start to the year but has found his groove again recently and will be looking for a top ten. Jason Meara has been is superb form in his rookie 450 season and will be hoping to get his name out on Sunday. A top ten is more than possible for Meara if he gets away. John Meara is also on good form and is coming off a win in the Irish championship last weekend.

James Mackrel has impressed a lot on the 450 this season at home and will be looking open some eyes to his speed on the big bike on the British scene if he can ride after a crash at the Irish championship last weekend. Luke Smith will also be there and looking for points on his Yamaha.

MX2 is very competitive this year with a host of GP level riders battling for the title. Unfortunately last year’s winner, Conrad Mewse (still fourth in the championship), won’t be in action after breaking his wrist earlier in the season but his teammate, riding for local man Roger Magee’s Hitachi fuelled by Milwaukee KTM squad, will be out to get the win and continue his assault on the British title.

Vaessen has shown great speed in the Grand Prix events this year and the sand should suit the Dutchman who currently lies 5th in the championship, 30 points off the championship lead after suffering a DNF at Blaxhall.

Martin Barr is just two points behind Vaessen in sixth and, just like the Dutchman, suffered a DNF at Blaxhall knocking him back in the championship. Barr needs a big result at Desertmartin to stay in contention for the title, but he has the pace to go for the win if he can get the starts he needs to put him in contention. Barr usually raises his game on home soil and with no Graeme Irwin this season, all hopes for a local podium or a win rest on Barr’s shoulders.

The front of the championship couldn’t be tighter. One point separates points leader Dylan Walsh from second place Josh Gilbert on the Buildbase Honda with Walsh’s Revo Husqvarna teammate just seven points off the lead in third!

Other riders to look out for include Ashton Dickson, Taylor Hammal and Tom Grimshaw along with Liam Knight but all Irish eyes will probably be on Glenn McCormick and Jake Sheridan!

McCormick has been in superb form this year scoring top ten results and lying 12th in the championship, just five points off tenth place in the championship. He will be hoping for a top ten at least this weekend on a track he knows well.

Jake Sheridan has made a great comeback in 2019 after breaking his back last season. Sheridan has won at home and elevated his game in the British championship scoring strongly in the last couple of rounds. Sheridan is more than capable of top 15 at Desertmartin if not a top ten if things go really well for the very determined Irishman.