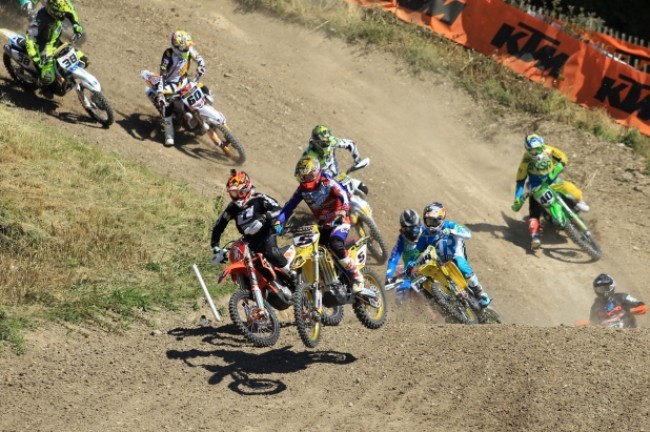 Following a seven week summer break the Maxxis ACU British Motocross Championship powered by Skye Energy returns to action on Sunday 6th September at the sand circuit of Preston Docks. Preston Docks is another new venue to the Championship calendar for 2015 and the deep sand is sure to produce some exciting racing as the series reaches the final stages.

In the MX2 class Max Anstie returns to British Championship action following his recent domination at World Championship level taking eight race wins in the last ten. Monster Energy DRT Kawasaki’s Anstie heads to Preston Docks with a 23 point advantage over Steven Lenoir on the Dyer and Butler KTM. The battle for third place in the championship sees Ben Watson on the Hitachi Construction Machinery REVO KTM lead Wilvo Forkrent KTM’s Adam Sterry by 8 points. Bryan Mackenzie on the Pendrich Kawasaki currently holds fifth in the championship and will be looking to maintain his position ahead of Apico Husqvarna’s Steven Clarke.

In the MX1 class Hitachi Construction Machinery REVO KTM’s Shaun Simpson heads to Preston Docks on the back of two GP victories at Lommel and Assen. Simpson will be hoping to secure his second British MX1 title with a round to spare as he currently leads LPE Kawasaki’s Tanel Leok by a massive 116 points. A further 16 points behind Leok is fellow Estonian Gert Krestinov on the Buildbase Honda. The battle for fourth place sees Martin Barr on the BRT KTM lead MBO Power ASA Scaffolding Yamaha Racing’s Brad Anderson by just 1 point.

The MX1 class will see the added excitement of former British Champion Billy Mackenzie competing as a wildcard for the Monster Energy DRT Kawasaki team. Mackenzie is making his return to racing in the UK following a number of seasons competing in Australia.

Preston Docks also marks the return of the MXY2 class for the fourth round of their Championship and it is Ollie Osmaston who leads the title chase by 32 points over Jay Hague in second. The battle for second place in the championship is very close with just 5 points separating four riders, with Rob Yates just a further 2 points behind Osmaston, and 1 point ahead of Robbie Dowson with Henry Williams a further 2 points behind.

The action starts at 9am with the Qualifying sessions followed by the first race main race at 12:15pm and Preston Docks can be found using the postcode PR2 2HW.

For more information about the championship please visit www.mxgb.co.uk. – See more at: http://mxgb.co.uk