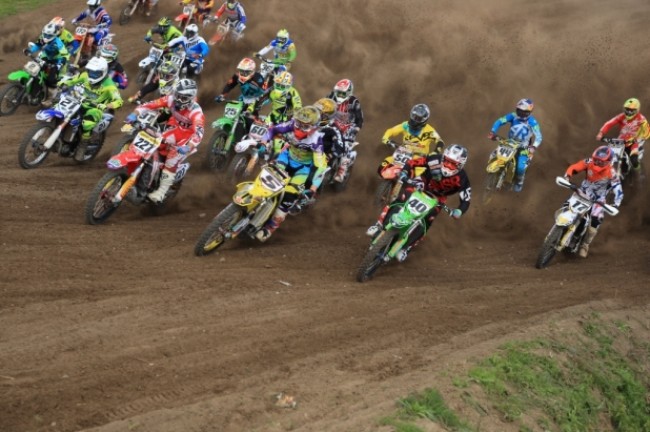 This weekend will see the eighth and final round of the Maxxis ACU British Motocross Championship powered by Skye Energy take place at FatCat Moto Parc. The deep sand circuit near Doncaster will be a tough and demanding end to an already exciting championship.

In the MX1 class Shaun Simpson claimed the championship crown at Preston Docks during the previous round. With the championship already decided Simpson will be keen to complete his 100% overall streak. Behind Simpson is Tanel Leok who needs just 15 points from the opening race to secure his runner up spot in the championship.

The battle for third place in the championship will be hotly contested with just 28 points separating Gert Krestinov, Brad Anderson, Martin Barr and Greame Irwin in third to sixth places, with Kristian Whatley in seventh just a further 14 points behind and with an outside chance of third in the championship.

FatCat’s will also see the return of Jake Nicholls who will be looking to end the season on a high after a year plagued by injury, another rider also looking for a strong result will be Elliott Banks-Browne.

In the MX2 class the championship looked set to be going in the direction of Monster Energy DRT Kawasaki rider Max Anstie until his crash at the Motocross of Nation saw him out of action and giving Frenchman Steven Lenoir the chance to steal the title at the final round. Lenoir need requires just 45 points across the three moto to take the crown for the Dyer and Butler KTM team.

FatCat’s will also mark the final round of the MXY2 championship where Oliver Osmaston leads the championship by 38 points. The battle for second place sees Robert Yates sit in second, 6 points ahead of Jay Hague in third and Robbie Dowson a further 3 points behind in fourth and Henry Williams a further 16 points back in fifth.

The action starts at 9am with the Qualifying sessions followed by the first race main race at 12:15pm and FatCat Moto Parc can be found using the postcode DN3 3EH.