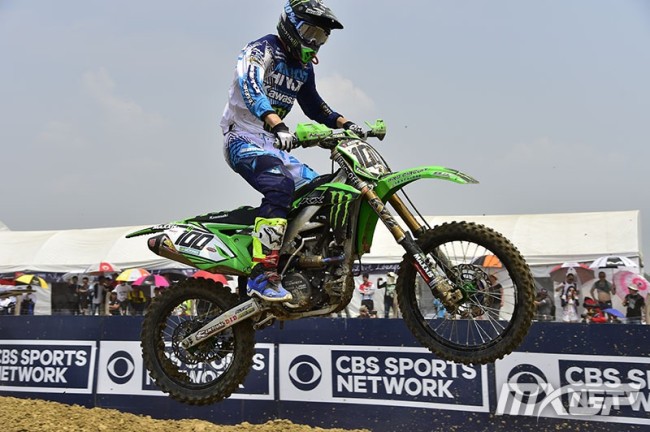 Get ready for round two of the Maxxis ACU British Motocross Championship supported by Pro Clean, which will return to the familiar and popular venue of Canada Heights this weekend where the crème de la crème of British Motocross will line up for yet another showdown.

The sandy, technical and undulating hillside circuit is a renowned venue on the calendar. It has seen many memorable battles in the past and we should expect nothing less this weekend as the premier class MX1, gets set to pick up where it left off with Monster Energy DRT Kawasaki’s Tommy Searle leading the way. Searle was incredible at round one where he rode to an unchallenged double moto victory for a perfect score and the championship lead.

‘Championships are not won on your good days, they’re won on your bad’ is how the saying goes, which is the optimistic way of looking at Shaun Simpson’s performance where he went on record to say he was feeling off all weekend and was disappointed with his riding. This weekend, the defending champion Simpson, will be looking to put the Wilvo Virus Performance KTM back on top of the podium and judging by his track record at the Heights where he was flawless last year with three moto wins for the overall, he should be in good shape to bite back.

Searle and Simpson have been in the wars over the past couple weekends where they were racing abroad in the FIM Motocross World Championship. Searle broke his nose in a little spill in Argentina two weeks ago while Simpson crashed last weekend in Mexico and was hit full by another rider. Both riders are OK and are looking forward to racing back on home soil this weekend. Meanwhile Tanel Leok is showing no signs of slowing up despite his advancing years. The ‘Estonian Express’ carved his way to third overall at the season opener at Lyng and should be in good shape to uncork another bottle of fizz this weekend given the track is bound to get rough and rugged, just how he likes it.

Challenging for the top three, a rejuvenated Jake Nicholls is fired up and ready to show what he’s got. We caught a glimpse of this in the final moto at round one where he got everyone’s nod of approval with his epic ride for third in that race. Hitachi Revo Husqvarna’s Jake Nicholls currently sits fourth in the championship standings tied on 33 points with Buildbase Honda Racing’s Graeme Irwin.

Irwin is 1 point clear of his Buildbase Honda teammate Kristian Whatley in sixth after a mediocre start to the championship, at least by their standards. With the pre-season jitters and drama out of the way, the duo will be looking to claw back some valuable championship points this weekend while others such as

In MX2, the opening round was dominated by Rockstar Energy Husqvarna Factory Racing’s Max Anstie and Conrad Mewse with the duo finishing first and second in both races. Anstie finished third in the world championship last year whilst Mewse, Great Britain’s most recent prodigy went on to win the opening round of the 2016 European Championship EMX250 class with a double moto victory. Unfortunately both riders won’t be on the line this weekend due to other team commitments abroad. Therefore the MX2 championship is still wide open with Hitachi Revo Husqvarna’s James Dunn heading in with the highest seeding after finishing third in Lyng.

Dunn is just 3 points clear of Planet Advanced Racing Suspension/Braithwaites Brad Todd who appears to be this seasons dark horse after his blinding performance at the opener where he tied with Buildbase Honda’s Martin Barr for fourth. Geartec Yamaha UK’s Lewis Tombs is also in good shape in sixth.

Meanwhile, Apico Husqvarna’s Steven Clarke and Hitachi Revo Husqvarna’s Ben Watson are two riders that are buried in the results after rotten luck in Lyng where both pulled out of race one with mechanical problems. Both Watson and Clarke are more than capable of winning, although Watson will be entering with an injury after he broke his foot racing in Argentina two weeks ago.

Two more riders to look out for as they make a welcomed return to the championship are Wilvo Virus Performance KTM’s Adam Sterry and Monster Energy DRT Kawasaki’s Mel Pocock.

After a stellar start to the series at Lyng, Canada Heights, organized by the popular Sidcup Club, is set to host round two this weekend April 24th in Swanley, Kent (BR8 8DX).

Tickets are available to buy on the gate, £20 for adults and £5 for under 14’s. Family tickets are £45. Camping will be available on the Saturday and for more information please go to www.mxgb.co.uk