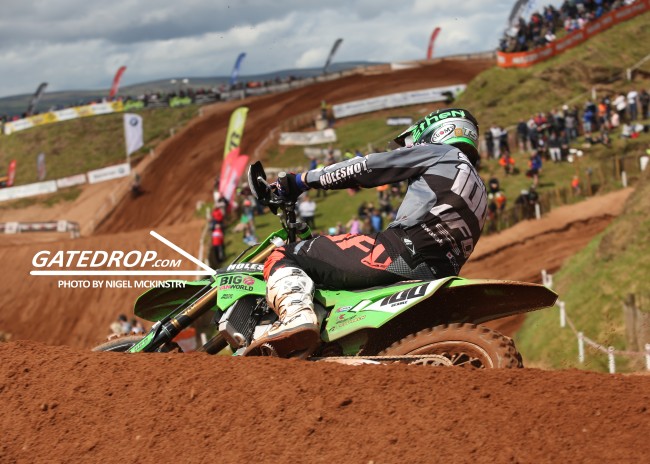 Tommy Searle (BOS Kawasaki) could sew up the MX1 title at round seven of the Maxxis ACU British Motocross Championship supported by Pro Clean at the world-famous Foxhill circuit on Sunday.

The iconic track has received a lot of TLC in the month leading up to the event and a huge amount of soil has been brought in.

Promoted by the Langrish Motor Cycle Racing Club at the circuit that was the scene of a string of epic ’90s GPs, the penultimate round will see Searle start with a 49-point lead from Shaun Simpson (RFX KTM powered by PAR Homes).

All he needs to do is beat the Scot by two clear points and the title will be his but he’s currently racing with hand and rib injuries and Simpson – whose title hopes were dealt a heavy blow with a double DNF following technical problems at round five at Desertmartin – will be determined to carry the title fight into the final round.

Between them the pair have taken every overall this year but it’s by no means a two-horse race and there are some seriously fast men all aiming for a podium finish.

Currently sitting in third, class rookie Jake Millward (Chambers Racing Husqvarna) is still in with a mathematical chance of the title but he’ll be more concerned with getting on the podium for the third time this season and staying ahead of fourth and fifth-placed riders Mel Pocock (ASA United KTM) and Harri Kullas (Cab Screens Deos Group Honda).

Back up to speed incredibly quickly after a long lay-off through injury, Jake Nicholls (Buildbase Honda) has to be considered a podium threat and Jake Shipton (Crescent Yamaha) – after getting on the box for the first time in his career at round five at Desertmartin – will fancy his chances at what he describes as his favourite track.

It’s too close to call at the top of the MX2 class where REVO Husqvarna UK’s Dylan Walsh and Alvin Ostlund are running 1-2, separated by just 12 points, with Josh Gilbert (Buildbase) Honda in third a further 22 points off the pace.

Walsh banged his shoulder up at last weekend’s MXGP of Belgium but should be fully fit for Foxhill and Ostlund broke the top 10 in the MX2 world championship for the first time this season at Lommel but neither have raced at Foxhill before so Gilbert will start with a slight advantage.

You can always expect Martin Barr (Crescent Yamaha) to be in contention and don’t rule out Ashton Dickinson (Craigs Motorcycles KTM) who finished on the podium at Blaxhall.

Another rider with the potential to shake things up near the front is Austrian Michael Sandner (Hitachi KTM fuelled by Milwaukee) who was impressive at Lommel in his debut as a fill-in rider for the team.