British AX: The Story so far! 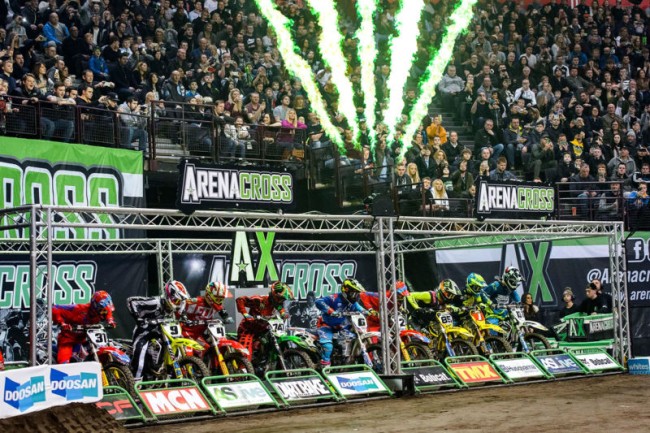 We are already three rounds into the 2017 British Arenacross season and it’s fair to say there have been some surprises. Cyrille Coulon has been the main man so far this year winning two of the three rounds, if it wasn’t for a bike problem he would be unbeaten heading into Belfast. As Belfast is having two rounds this weekend there are plenty of points up for grabs so his rivals are going to have to step up and take points of him.

Angelo Pellegrini won the first round and holds down second in the series just nine points behind Coulon, he was a dark house for the championship heading into the season and looks good so far. Florent Richier has been consistent and the good starts in the finals are definitely helping him, a solid third in the series is a massive improvement on last year.

Two title favourites Cedric Soubeyras and Thomas Ramette are down in sixth and seventh in the title race respectively. Who would have thought that before the season? Admittedly, they have got the speed and have shown that but they have been crashing in the main. In terms of the title race, Belfast is going to be massive for them both as they are already thirteen and fourteen points behind the championship leader. If they want to win this series, they need to gain points this weekend!

There is a lovely battle going on between Adam Chatfield and Jack Brunell for top British rider in the series. At the moment Chatfield holds down fourth in the series just one point ahead of Brunell. Chatfield started the season off better but Brunell is getting better every week. It’s a battle that could go right down to the wire to determine the best British rider.

There are still four rounds to go so don’t be surprised to see plenty of changes in the championship standings before the final round at Wembley.

In terms of the Pro Lites class it’s the story of the French invasion so far. Yannis Irsuti has only failed to win one of the final’s so far which is pretty impressive and he holds a twelve points championship lead because of this. His rivals can’t afford to let him win both nights at Belfast otherwise it’s going to be very tricky stopping him win the title on his I-Fly JK Yamaha.

Only eleven points separate second to fourth in the championship chase so it’s hard to call between Chris Bayliss, Dylan Woodcock and Joe Clayton. The rider that can stay the most consistent from now until the end of the series will most likely clinch the second position.

Our very own Jason Meara is in fifth position in the series and has a nice eleven points over Aaron O’Mahony in sixth. Meara sits twelve points behind Clayton, he has a chance of finishing higher in the series if he can consistently beat Clayton for the remainder of the season.