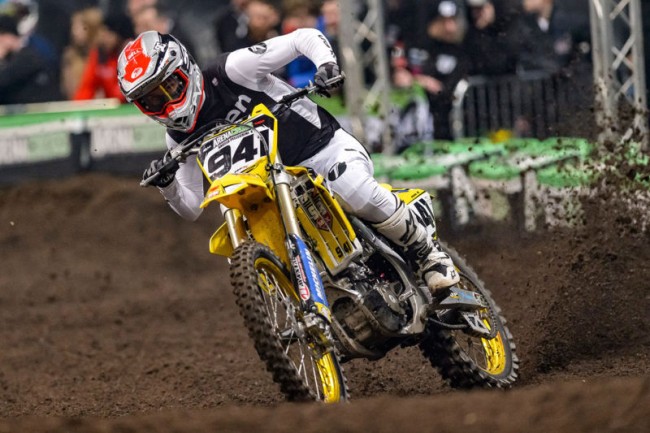 Heading into the Pro AX main event things were looking very good for the SR75 Suzuki team with Thomas Ramette and Cyrille Coulon in sensational form. Both of them won both their heat races and were looking very comfortable going into the final, it was going to be interesting to see them both up against each other later on in the main event!

Other riders looking good in their heat races were the RFX ST Bazey due Cedric Soubeyras and Angelo Pellegrini as they both went second and third in their respective heats.

In the newly introduced hot lap it was Angelo Pellegrini who put in the quickest lap time as he just edged out team mate, Cedric Soubeyras. That surely give him confidence that he had the speed to win going into the final.

There is usually an LCQ race to see who goes into the final, however this year there is an LCQ head-to-head to determine who will make it into the final. It was Portuguese rider, Hugo Basaúla who won the LCQ head to head as he just edged out Adrien Escoffier, both the riders progressed to the main event.

When the gate dropped for the main event it was Adam Chatfield who got the hole shot! Two of the heavy favourites – Ramette and Soubryas went down and lost a lot of time which ruined any chance they had.

Chatfield had over two seconds on Pellegrini who was catching fast on the Brit. However, Cyrille Coulon who was sitting in third and at one stage over six seconds behind Chatfield, passed Pellegrini and quickly moved his way into the lead. Disaster struck for the French rider with a lap to go though and he ended up way back in ninth. This gifted Pellegrini with the win, a brilliant start for the Italian rider.

Florent Richier sneaked his way past Chatfield who eventually crossed the line in third as top Brit. Jack Brunell was holding fourth position but Adrien Escoffier made the move on the Brit on the last lap but fifth for the Brit is still an impressive start to the season.

In the pro lites class it looks like Yannis Irsuti is going to take some beating as he won both the finals in the class. Joe Clayton was less than a lap away from winning the first final but then made a mistake which cost him the win and he finished down in fifth! Chris Baylis put in an impressive second moto to finish in second on his Buildbase Honda and beat Clayton. Irish rider, Jason Meara was impressive and finished fourth in the both the moto’s having good battles with Woodcock and Clarke throughout the weekend – a podium finish isn’t far away!