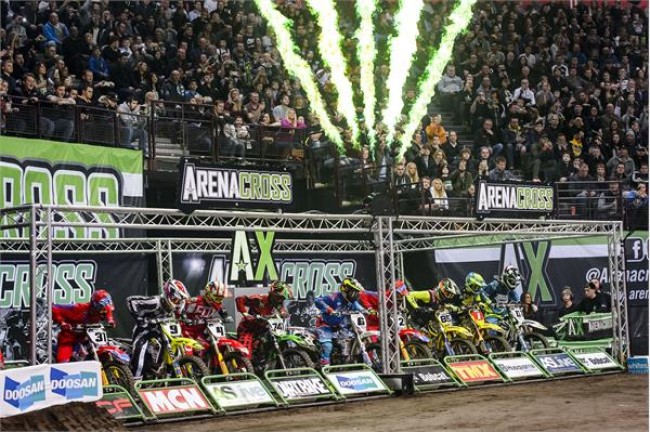 The 2017 Arenacross Tour opened with a bang at the Manchester Arena last week, when an almost-capacity crowd of 7,500 enjoyed a packed programme of flat-out indoor MX racing and world-class FMX displays.

Popular Italian Angelo Pellegrini, did his new RFX St Blazey team proud, by not only blasting his Suzuki to the overall win, but also firmly stamping his mark on the newly-introduced AX Pro Hot Lap – a nail-biting man and bike against the clock. He headed the Keystone Honda of Florent Richier and Buildbase Honda of Adam Chatfield.

With the first one of the Tour safely done and dusted, the crew, teams and riders have had a quick turnaround to get ready for Glasgow. A number of rider changes and the introduction of a few wild card riders will keep things fresh, and Scottish race fans are expected to be rooting for former British MX champ and GP contender Billy Mackenzie who will ride with Dave Thorpe’s Buildbase Honda team for Glasgow only. A new signing for the MVR-D Husqvarna team in the shape of British MX2 top runner, and a previous Areancross Pro class runner-up, Nev Bradshaw is sure to be a popular move and, on the Pro Lite front, Irish MX2 champ Jason Meara will get a massive boost to his AX career when he is taken info the RFX St Blazy fold to replace injured George Clarke.

Arenacross never fails to surprise and, on that note, it is welcoming a local lass, Cristina Palmer to the Youth 65cc class. The chatty ten-year-old has been holding her own against the boys, winning the North of England XC championship, and she is chomping at the bit to get out on track and show her family and friends just what she can do. This little pocket-rocket could well give the AX boys a bit of a shake-up.

“The beauty of Arenacross is, regardless of what class you compete in, you never quite know who’s going to win,” said Matt Bates CEO of ASLive, the promoter of Arenacross. “We already know that Cristina is competing at a very competitive level in Scotland, so she stands just as good a chance as every single rider she lines up next to on the start gates on Saturday night in the SSE Hydro Arena. We wish her the best of luck and look forward to welcoming her to Arenacross stardom!”