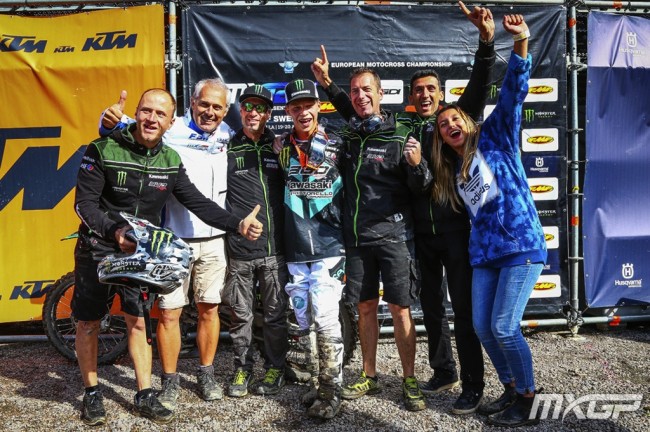 During the final EMX125 round of the year, Brian Moreau clinched the title and won his first European title on his BUD Kawasaki.

The talented young French rider has been highly rated since a young age but had never won a European or World championship in the past but he has been close! In 2012 he was second in the EMX65 but won the last moto of the day which shows he had the speed but a bad first moto meant he missed out on the title. It was Swiss rider, Xylian Ramella who beat him to that title.

In 2015, Moreau was close to winning the Junior 85cc World Championship as he won the second moto of the day. However, he could only manage a fourth place in the first moto which meant he lost out on the title to Raivo Dankers who was a competitor for Moreau this year too!

Last year after finishing ninth during his rookie year in the EMX125 class he came into the season as one of the favourites for the title. Everyone knew he could ride hard pack but the question mark coming into the season was if his sand riding would be up to a good enough standard. Moreau had all the right answers throughout the course of the season and is the deserved EMX125 Champion.

Throughout the year Moreau was very consistent, that’s been one of his strengths. Perhaps why he never won a 65cc or 85cc title is because they were all decided on one day and while he’s capable of winning on the one day it was his consistency that was so impressive this year.

France have a very talented rider in Moreau and it looks like he’s in for a very bright future. Moreau could turn a few heads in the EMX250 class next year and if your BUD Kawasaki you certainly don’t let him go!

Take a look at Moreau’s career to date since he burst onto the European scene in 2012: